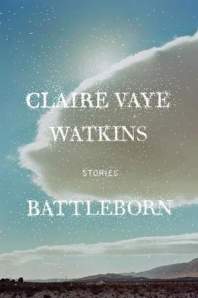 Claire Vaye Watkins writes as if she scratches her stories from the grit and mining detritus of the Nevada desert she grew up in, then transforms the elemental by gathering language as rich and as natural as the sand or minerals found there like an alchemist. The work is as layered as the often brutal human history of the region, a history she both draws upon and to which she will surely add her own narrative. And like the harsh landscapes and histories that everywhere informs these brilliant stories, when you peer long enough, closely enough, at what seems an empty, heartless place, you not only see its unforgiving beauty within the parched hills and among the tailings castaway after decades of exploitation, you also find glitter among the hardscape, the glint of silver and gold. Like the characters in her story collection Battleborn (Riverhead Books, 283 pages), the truths Watkins unearths require strong stomachs and strong wills to digest but reward the reader with sparkling prose, hard but achingly accurate portraits of unforgettable characters, and gemstones of hope among the chaos of despair and interior pain.

They are difficult portraits, not for the faint of heart. In Battleborn you pass time among prostitutes and failed prospectors, with the progeny of Manson’s Helter Skelter crew and with high school pizza makers seeking identity through sexual awakening in a Vegas hotel room with strangers. We meet a narrator so lost he writes life-revealing letters to a stranger whose address he found among the remains of an apparent desert car accident. Remarkably, however, Watkins is uncanny at not just allowing unfamiliar readers an introduction to such roughened and often weathered characters, within them she nearly always helps us also see vulnerability, sorrow, love, desire, and yes, hope.

Savagely gifted, Watkins can create an odd kind of beauty even in horror and ugliness like these lines describing a dying peacock, a bird that has become one of the last and most unlikely objects of affection for an aging, gay whorehouse manager, facing rejection from a beautiful, lost young tourist from Italy in “The Past Perfect, The Past Continuous”:

For an instant the air is filled with the report of the sternum snapping. Michele’s never seen a bird like this. The snowy feathers redden as blood wells up around the prongs. He feels the give of the meat as he plies the rake from the bird’s breast.

Or consider this movement from wanted violence to heartache and defeat in “Man-O-War”, a story where a lonely old divorcee thinks he finds, then loses, new attachment to another:

The truck pulled away and began its descent to the bald floor of the valley. Milo resumed her barking. Harris told her to shut up, but she went on. Rhythmic, piercing, incessant. The old man had never heard anything so clearly. He felt a steady holy pressure building in him, like a vein of water running down his middle was freezing and would split his body in two. He lunged at the dog. He wanted ore to skull. He wanted his shoulder burning, his hand numb. He wanted holes that had been her ear and eye growing wider, becoming one, bone crumbling in on itself like the walls of a canyon carved by a river. He wanted wanted wanted.

The stories are like a series of accident scenes from which you cannot look away. But more than that, you don’t want to look away. Like with Harris and this sudden urge for violence against his only companion, the only thing left alive in his life alone in the desert above an empty lake bed, we understand the deep, scouring loneliness that manifests itself in this moment when another person, a stranger requiring care, is taken away from him and he has realized that this target of his misplaced affection is as wounded as he.

Reviews like those offered by no less potent a voice in short fiction than Joy Williams have likened Watkins to Joan Didion for her mature management of economy and sharpness of prose, and it is an apt comparison, for Watkins proves to understand not only the power and beauty of the perfectly chosen word or phrase, she demonstrates that she understands what not to say just as keenly. It is often the sparseness of these stories that is most striking, the space that allows a focus on just how lonely and lost so many of these characters are. In such characters, Watkins echoes other writers of the literary West with her presentation of trailer parks and one room casinos and unforgiving apartment complexes, landscapes passed over and cityscapes better left unvisited, places and people that recall Raymond Carver most closely, with a nod to Nathanael West, or moved East, characters that could inhabit an Andre Dubus story. Like those writers and like Didion, her prose is precise, sometimes nearly deceiving by feeling so understated and matter of fact. Yet, just when you are brought closest to the story by its accuracy of detail or directness of dialogue, she’ll leave you abruptly panting at the beauty of a turned phrase or graceful description. The details are precise and revealing, the stories nuanced and extraordinarily mature in their vision. Here for example, the narrator of “Graceland”, trying to find her bearings six months after her mother has committed suicide, reflects on her boyfriend’s unfaltering patience:

After Peter and I have sex there is some smallness in me that wants to turn to him and ask, In your professional estimation as a scientist, how long can a relationship be sustained on pity and anthropomorphism and a postcard on the fridge? But there is such bigness in him that he would say, As long as it takes.

This remarkable ten story collection certainly has not gone without notice and praise, winning the Story Prize for 2012 by gaining the nod over collections by Junot Diaz and Dan Choan, and listed by the San Francisco Chronicle as one of the best books of that year, still, like most story collections and indeed like most literary writers, Watkins has not gathered the readership she deserves. Not all readers love collections. But this one offers the very best the short form can accomplish, presenting stories that read with the breadth that seem ready for expansion into novels yet that, every time, prove fulfilling and complete as they stand. You will not want to seek out the real-life equivalents of these characters to pass your leisure among but you will cherish the way that meeting them in fiction can transform your vision of your own fears of failed life ventures and castings of hope.

–Mark Hummel, author of In the Chameleon’s Shadow, 2014