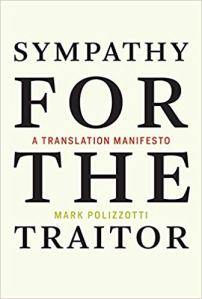 These remarks are based, largely, on Emily Wilson’s book review of Mark Polizzotti, Sympathy for the Traitor: A Translation Manifesto (MIT Press, 2018). The review appears in the New York Review of Books, May 24, 2018, p. 46-47.

Assuming that most of us are not bilingual or trilingual, without literary translation we cannot read novels, stories, poems written in foreign languages. But practically no one seems to agree on what makes for a good literary translation. The crucial question always seems to be how much leeway the translator is given. Must he/she (1) remain very close to the original, producing a literal translation that may not read well in the target language? (2) diverge from the original to produce a kind of imitation? (3) push the imitation so far that it amounts to a traducing of the original (even though it may read well and be a work of creative art in the target language)?

According to Emily Wilson, Translation Studies as an academic discipline is a phenomenon only of the past fifty years or so. Professors who are not themselves translators have made careers in “translation theory,” which, alas—like so many academic disciplines—involves “increasingly abstract discourse.” In fact, Polizzotti suggests that Translation Studies is “one of the few disciplines in which the study of a subject seems bent on demonstrating that very subject’s futility.”

In Polizzotti’s view academic specialists on literary translation seem to be asserting that (1) it cannot really be done successfully; and (2) you should not even try to do it, if successfully means producing a fluent, readable, creative literary work in the target language. Being totally faithful to the original means, apparently, creating “unreadable, unidiomatic, clunky translations.”

This recalls Vladimir Nabokov’s attempt in the sixties of last century to translate the greatest narrative poem in Russian literature, Pushkin’s Evgeny Onegin. After making herculean efforts to get the thing across into an English that maintained the creativity and literary form of the original, Nabokov finally gave up and said it could not be done. He published his four-volume translation into English, the first volume containing the original and a “pony” literal translation, and the other three volumes containing extensive academic commentary on the work. He also wrote a little poem, in commemoration of his new attitude toward literary translation: What is translation? On a platter/ A poet’s pale and glaring head,/ A parrot’s screech, a monkey’s chatter, And profanation of the dead.

Of course, only academics, who often make abstraction and obfuscation for its own sake a paramount virtue, could argue logically for bad—awkward, unreadable, “foreignized”—literary translations. Not an academic himself, but “a prolific translator of French experimental fiction into English,” Polizzotti argues for a commonsense approach to the issue. “He quotes approvingly the maxim of Dante Gabriel Rossetti that ‘a good poem [must] not be turned into a bad one.’”

Polizzotti asserts what should be apparent but what often is not: “the single most crucial requirement in producing a viable target version is to be a talented writer in one’s own language.” Emily Wilson continues, “It is never enough to ask if a translator knows the source language well enough to translate from it: we must also ask, always, whether she is a good enough writer of English to create something that will live on its own. In his blithe assumption that there is such a thing as literary value and that you know it when you read it, Polizzotti stands outside the fashions of the contemporary academy; he is quite willing to claim that some pieces of writing are simply better than others.”

Just try reading reviews of translated literature in practically any American periodical. Does the reviewer dwell upon the literary talents—or lack thereof—of the translator? Seldom. The reviewer is most often concerned with quibbling over how the translator failed to get this or that word right, or how the translator missed some single subtlety in the original. Reviewers “very rarely comment on how any new translation might enrich contemporary English literature, or on whether the translator is a thoughtful, well-read, or original writer of her own language.”

“Polizzotti meanders around the crucial question of whether a translator can go too far from the original and slip from translation into imitation, or betrayal. It depends on whether the result is any good, and we are given no general parameters by which to make this judgment. The implicit criterion is not whether this or that phrasing or syntax is preserved, but whether the overall result allows the text to speak as best it can ‘across nebulous cultural boundaries, and not lie mute and moribund on the page.’”

When I taught Russian literature in a university I would sometimes ask my students why anyone would want to read creative literary art. There are a variety of answers to that question. Unfortunately, the number one answer in the twenty-first century, I fear, is that no one, or practically no one, does want to read creative literature. But my best answer, back then, and even still now, is that you read literature for pleasure. It’s not a simple, easily attained pleasure, but it is pleasure nonetheless: the joy of communing with the aesthetics of art, which are contagious. You read great literature, you commune with it properly, and it infuses you with creativity; you end up making creative art in your own mind—and that’s a joyful business.

Polizzotti’s book “is in some ways a negative polemic, against the excesses and abstractions of contemporary translation theory.” Polizzotti argues for “making sure that literature is enjoyable, so that people actually want to read it . . . . . . The academic theorists often imply that clunky, unidiomatic, foreignized translations are good for us, no matter how stodgy they may be. By contrast, Polizzotti makes one feel that creating and reading translated literature can be a genuinely pleasurable experience.”

As for myself, it should be obvious by now that I’m on Polizzotti’s side. I have translated literary works by the Russian writer Ivan Bunin extensively. My book of Bunin’s stories and novellas appeared in 2006 (Ivan Bunin, Night of Denial, Northwestern University Press). I would like that book judged largely on whether the translated works read as literary art in English. Lately I have begun translating some Russian poetry, with the emphasis largely upon whether I can create an effective poem in English. This means translating not word for word, but “sense for sense.” I try to make a good poem in English, while retaining, to the extent this is possible, the same sense of the words in Russian. I try for the same atmosphere, the same mood, the spirit of the original—but not the exact words of the original.

Are my results not translation, but “imitation,” not translation, but even “traducement”? Some would say so. Most Russian poems are metered and rhymed. I try for the meter and the rhyme in the target version. This in itself places a huge burden on the text. Rhyme is especially tyrannical, in the way it has of forcing the translator into “imitation” to satisfy its ringing and jangling demands.

For years before he gave up on the possibility of literary translation, Vladimir Nabokov did his best at the same thing I’m trying to do now. Sometimes he was remarkably successful at producing an English version that remained, essentially, true to the spirit of the original, but also succeeded as a work of art.

Here is Nabokov’s version in English of one of Mikhail Lermontov’s most well-known poems.

Amid the blue haze of the ocean

A sail is passing, white and frail.

What do you seek in a far country?

What have you left at home, lone sail?

The billows play, the breezes whistle,

And rhythmically creaks the mast.

Alas, you seek no happy future,

Nor do you flee a happy past.

Below the mirrored azure brightens,

Above the golden rays increase—

But you, wild rover, pray for tempests,

As if in tempests there were peace! 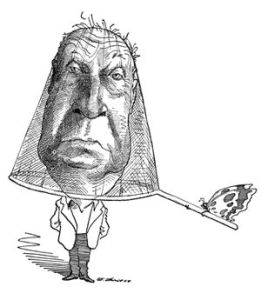