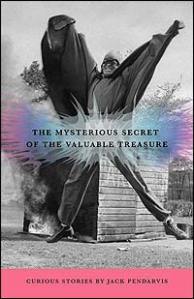 In The Mysterious Secret of the Valuable Treasure (MacAdam/Cage Publishing, 183 pages), Jack Pendarvis has the kind of wit that ambushes you – and then bludgeons you until you can no longer suppress the laughter. This collection of nine stories and a novella mocks bad writing and moronic thought through a complete submersion in each, with protagonists believing in absurd premises (like the dead-beat husband who imagines himself as a famous historian and the unemployed drinking buddies who want to be writers without doing the work.) The subtitle – “Curious stories” – only begins to describe these off-the-wall forays into the hilarity of self-importance.

One of the most developed stories in the collection is “The Pipe” about a DJ buried alive in the desert as a publicity stunt, with a security guard and a paramedic watching over the pipe for signs of distress. The paramedic is more interested in smoking pot and fooling around with women, but the security guard takes his job seriously – to the point of obsession. The story has hints of “Rosencrantz and Guildenstern Are Dead” and “Waiting for Godot.”

The funniest piece is the collection is the title novella, which satirizes amateur writing and unrealistic ambitions. The narrator is the self-described laziest man in South Preston who decides to be a historian: “In fabled times of days of yore, only the ‘landed gentry’ had time to write and contemplate. In today’s modern age, it is the unemployed and the upset who enjoy such luxuries.” As he researches the history of probably the blandest place in America, he decides instead to track down a treasure. Peppered with exclamation marks, elaborate dialogue tags, rhetorical questions, clichés, unnecessary adverbs, stilted phrases, and redundancy (see the title), this has to be the funniest send-up of bad writing I’ve read. Somehow, Pendarvis manages to keep the story moving through ninety pages of (intentionally) dreadful writing.

Many of these stories, including the novella, go on for too long. As a result, these stories, although a hoot to read, often lag in the middle or near the end. Pendarvis’s humor, though, is well worth the lapses.

One word of warning: Don’t read this collection in a public place unless you want people to stare. When Pendarvis sneaks up on you with one of his offbeat lines, you won’t be able to stop yourself from laughing.

Sex Devil starts out as a normal high school student. Unfortunately his fellow classmates do not think he is normal. For you see, Sex Devil (real name Randy White) has a cleft palate.

Sex Devil attempts to get his fellow classmates to like him. Unfortunately he pretends that he knows karate, which is a lie. Sex Devil’s lies are soon discovered. After that his fellow classmates put a thing on the blackboard. It is a picture of Sex Devil (I mean Randy White) with slanting eyes, which he does not have. Underneath the picture it says Wandy Wite, Kawate Kiwwah. Also there is a bubble coming out of Randy White’s mouth. Randy White is saying WAH!

The janitor has vowed not to fight because he accidentally killed a man once. He has also made Randy White swear not to defend the janitor in case anything happens to him. The janitor has learned to accept his fate.

Now we go forward into the future. Sex Devil can afford the right kind of medical insurance to where his cleft palate can be surgically fixed. While he is pretending to be Randy White he continues to talk like he has a cleft palate. This is just to conceal his secret identity.

All of the boys of Sex Devil’s high school class have grown into manhood to become a criminal organization. They run the city under cover of darkness, plotting fake terrorist plots to keep the city in turmoil while they make their robberies. As a result some innocent Arab Americans get sent to prison.

Sex Devil is the prison psychiatrist for the innocent Arab Americans….. “