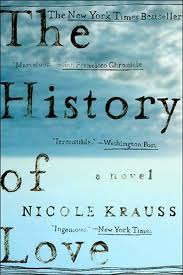 Nicole Krauss’s astonishing novel The History of Love (W. W. Norton & Company 252 pages), about a manuscript that survives the Holocaust, a flood, broken friendships, a plagiarist, misunderstanding, and obscurity has all the heart and intelligence of the best fiction being published today. Elderly Leo Gursky is afraid of dying unnoticed, and he plans his days so that people will see him and remember him. Among other schemes, he makes a scene in Starbucks and poses nude for a drawing class. Leo wasn’t always this lonely. Decades before, in a small town that was then part of Poland, he fell in love with a girl named Alma. He wrote a book about her before the two fled at different times and circumstances to safety during World War II. Despite the disappointments in his life, Leo continues to write, convinced that he will die when this next book is finished. Meanwhile, a teenager also called Alma, named after a character in a book titled The History of Love by a Chilean named Litvinoff, finds herself in the heart of a mystery: her mother is hired by a mysterious man named Jacob Marcus to translate The History of Love from Spanish. Since Alma’s father passed away years before, her mother has been overcome with sadness, and Alma sets out to find Jacob Marcus as a possible suitor. Oblivious to Alma’s quest, her brother Bird has decided he is one of thirty-six holy men, a “lamed vovnik”, and might even be the Messiah. And then there’s Litvinoff himself, in the past, with his personal story and connection to the manuscript and to Alma and to his own beloved Rosa. The stunning coup of this novel is how Krauss brings these diverse elements into a single, concluding moment.

Krauss has complete command of a story that could get away from a lesser novelist. Witty, sometimes sadly funny, with unforgettable off-beat characters, the novel draws in the reader from the first page, although its true strength isn’t evident until the last hundred pages. The comparison of The History of Love to Jonathan Safran Foer’s Extremely Loud and Incredibly Close is inevitable, since the two authors are married and both books were published in 2005. While the two works echo each other in parts, use similar postmodern techniques, and concern themselves with related themes, Krauss and Foer are too good to be lumped together. Still, these seem like companion books. The History of Love is every bit as inventive and as emotionally riveting as Foer’s novel – and vice versa – but it (as does Foer’s novel) seems to wink at readers who have read both. Readers familiar with Foer’s book will smile as Leo reveals that he is a retired locksmith who can open any door he wants. And the set-up of a young person, missing his/her dead father and searching New York for clues to solve a mystery will seem familiar. Beyond that, however, these books stand alone as remarkable works about people, both immigrants and natives, who are adrift in contemporary America.

When they write my obituary. Tomorrow. Or the next day. It will say, LEO GURSKY IS SURVIVED BY AN APARTMENT FULL OF SHIT. I’m surprised I haven’t been buried alive. The place isn’t big. I have to struggle to keep a path clear between bed and toilet, toilet and kitchen table, kitchen table and front door. If I want to get from the toilet to the front door, impossible, I have to go by way of the kitchen table. I like to imagine the bed as home plate, the toilet as first, the kitchen table as second, the front door as third: should the doorbell ring while I am lying in bed, I have to round the toilet and the kitchen table in order to arrive at the door. If it happens to be Bruno, I let him in without a word and then jog back to bed, the roar of the invisible crowd ringing in my ears. I often wonder who will be the last person to see me alive. If I had to bet, I’d bet on the delivery boy from the Chinese take-out. I order in four nights out of seven. Whenever he comes I make a big production of finding my wallet. He stands in the door holding the greasy bag while I wonder if this is the night I’ll finish off my spring roll, climb into bed, and have a heart attack in my sleep.

I try to make a point of being seen. Sometimes when I’m out, I’ll buy a juice even though I’m not thirsty. If the store is crowded I’ll even go so far as dropping my change all over the floor, the nickels and dimes skidding in every direction. I’ll get down on my knees. It’s a big effort for me to get down on my knees, and an even bigger effort to get up. And yet. Maybe I look like a fool. I’ll go into the Athlete’s Foot and say, What do you have in sneakers? The clerk will look me over like the poor schmuck that I am and direct me over to the one pair of Rockports they carry, something in spanking white. Nah, I’ll say, I have those already, and then I’ll make my way over to the Reeboks and pick out something that doesn’t even resemble a shoe, a waterproof bootie, maybe, and ask for it in size 9. The kid will look again, more carefully. He’ll look at me long and hard. Size 9, I’ll repeat while I clutch the webbed shoe. He’ll shake his head and go to the back for them, and by the time he returns I’m peeling off my socks. I’ll roll my pants legs up and look down at those decrepit things, my feet, and an awkward minute will pass until it becomes clear that I’m waiting for him to slip the booties onto them. I never actually buy. All I want is not to die on a day when I went unseen.