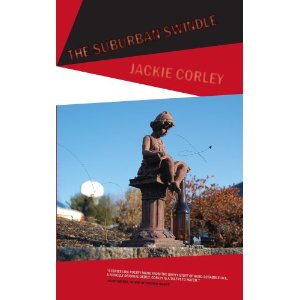 With The Suburban Swindle (So New Books, 99 pages) Jackie Corley delivers a collection of memoir-like stories about drunk, pissed-off, reckless, late-teen and twenty-something Jersey suburbanites fucking up relationships and getting the shit beat out of them. The narrative voice, sensibly consistent throughout the collection and rising to a kind of tortured literariness, wedges a space between author-narrator (who is destined to get the hell out of there) and subjects (who aren’t going anywhere). The narrator is an outsider-in-the-making, not quite not-one-of-them yet, but well on her way. Throughout this collection, the language is kicking violently against the box it finds itself in, rebelling like a young suburbanite, trying to find its meaning. It’s angry and frustrated:

A pale huddle in the back of the diner there, with the seedy red eyes looking at you but not taking you in—at the doubles of you, really, is what they were seeing. You’d catch their lips—just cracked, clear film-flesh and red food-color water sloshing around underneath—creeping up then, maybe. They got what you were about when they did their thin mouths up like that.

In this collection, characters move awkwardly and abruptly, “She breathed deeply, snapped her head back in front of her, eyes dry, clear and attentive, and pulled his hand off of her.” Descriptions are physical, but resist cinematic depiction. Details are often synaesthesic, for example with sounds having tactile qualities, “His voice keeps coming, steady and deep and wet—rusting out her armor.” Textures are animated processes: a young man has way of setting his mouth that reveals the “old man’s sloppy run of wrinkles around his mouth and chin” that will eventually form. These cross-modal explorations represent a kind of poetic hostility to prosaic semantics, and seem fitting devices for the subject. The dominate style, we might say, is the product of a self-inflicted violence to language—done in order to make the writing feel alive.

What’s wanting here is the raunchy soundtrack that would supply the sexy energy that fuels this lifestyle. Without it, it’s hard to see the point. Getting shit-faced, driving fast and possibly killing yourself is just not the same without the radio blaring, and I haven’t found an author yet who can quite put into language the thrill of doing stupid and violent things to the sound of music. The best medium for this subject may be rock ‘n roll, not literature.

Or, maybe not. The penultimate story of this collection, “At the Slaughter,” is told from two different perspectives, which have a kind a familial relationship with the narrative voice of the rest of the collection, but stand out as unique personalities. It is in this story that we see most clearly the talent of this writer, wrestling with her own formidable muse. Perhaps it’s not coincidental that one of the main characters in this story, Foster, is a musician. The other main character is in love with her. Here is Foster’s lover:

Foster’s voice is smothered violence, erupting in spite of itself…I watch her breath rise, watch the drops collect on her brow. Her fingers glide along the guitar frets, all skin and oil….She feels the beauty she holds in her hand and swallows the slick, bitter words.

Off stage, she is lovingly and admiringly described this way,

You never enter a room with Foster. She’s of the opinion that the room doesn’t exist until she steps into the splash of light, cups her hands into a warm microphone around her lips and hollers, ‘Hey-ooh. I’m here motherfuckers. Where’s my motherfucking drink?’

And you’re still slinking in the doorway, gliding through her wake.

In the shallow entryway of a split colonial, heads cock and limbs unwind and encircle her in rapid succession.

And she keeps shouting, ‘Nice fucking hat, Cal. Who the fuck wears a fedora?’ And, ‘Amy, Amy sweetheart, get away from that punk he doesn’t know what a tongue is for.’

With Foster, Corley does finally capture that seductive, rocking bad-chick charm she’s been after with these stories. The empathy she manages to make the reader feel for Foster is intense and deep, and no mean achievement. “At the Slaughter” convinced me that Corey is a writer worth watching.

Appropriately, in the final action described in the book, the hung-over narrator walks out of the apartment of her dysfunctional friends to go to her job as a journalist, a journalist who has just been assigned a significant story to cover. Jackie Corley holds much promise as a writer with significant stories to tell. Her suburban-punk voice is distinctive, accurate and unforgiving, with a steady force and pace that will no doubt take her some distance as a literary fiction writer.

Note: The Suburban Swindle was considered for the Dactyl Foundation prize for literary fiction.