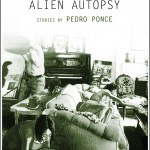 Pedro Ponce offers eighteen very short stories in this slender volume (Cow Heavy Books, 55 pages). Within the brief space Ponce delegates for himself not much can happen, but these vignettes do manage to develop vigorous fabula-like themes. In each short piece, a subject is opened, then skillfully closed.

In “Changeling,” a man late for a date stops off on the way to pick up some necessary item (condoms?) and has to wait for the register behind a woman overburdened with young children. He imagines his date’s now empty chair and the child that might have been had he not stopped.

In “One of Everything,” a recently decoupled man puts on a yard sale to be rid of all the accoutrements of cohabitation, leaving himself with one fork, one cup, one plate and etc. The Fourth of July is evoked. At the end of the day, after nothing has sold, he puts out a “free” sign. This is all that occurs in the one-page tale, but the repetition of the “freedom” theme gives this plotless story a sense of musical completion.  It’s a nice device, but even better is the well-handled imagery. While searching for items to sell, the narrator comments, “I came upon two saucepans humping lovelessly in the dish rack.” What an understated, masterful piece of language this is, perfectly on theme, with the dull-sounding “humping lovelessly” set sharply against the ugly “dish rack” of a dull affair. Bravo Ponce.

Throughout this collection, Ponce’s voice is mature, seasoned, cynical, clever, and usually terse. In “Industry,” a writer visits his lover, literally to gather material for his next work:

…There’s more than enough here for a novel, I say. I thought I’d try an essay or two. Maybe some poems.
You’re not a poet, she says.

There are handbooks, I reply, gauging the curl of her lashes.

A few of the stories are esoteric; some are surreal. In “Idyll,” Ponce parodies a Sci-Fi set-up of an approaching alien invasion, flashing forward teasingly, yet ending in less than a page, before the “fused fingers” can ever throw the switch.

Dogs chased squirrels and tennis balls in the parks, having yet to scent the unseen plague that would send birds raining from the branches. Cats kept their own counsel, sunning themselves on mantels before a freak alignment of planets granted them telekinesis of carnivores.

With skillful writing and easy wit, Pedro Ponce’s Alien Autopsy is a gem of a book that probably doesn’t have the readers it deserves.

One thought on “Alien Autopsy: Stories by Pedro Ponce”