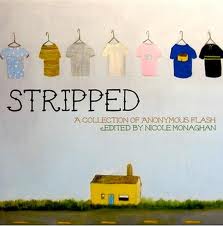 The premise here is interesting: an anthology of flash fiction with the bylines removed so that the reader can’t know the identity of the author. According to Nicole Monaghan, editor of this collection, the purpose is to question a reader’s assumptions about gender.

As an experiment, Stripped: A Collection of Anonymous Flash Fiction (PS Books, 102 pages) recalls I.A. Richards’ Practical Criticism and his withholding authors’ identities from his Cambridge students in the 1920s in order to come to grips with their literary values. It was a step forward in reading awareness. We live in a very different world now, to put it mildly—gender was not on Richards’ radar—but some of the same questions of reception persist.

Many of the stories in Stripped hinge on gender roles. How does knowledge of the author’s identity, for instance, affect a reader’s reaction to a story that expresses ambivalence toward motherhood? What about domination or abasement fantasies during sex? Does the gender of the author matter?

Monaghan speculates: “Perhaps as readers we can be more fully engaged with our characters, our disbelief more truly suspended, when we know nothing of the author.”

Before reading the book, I felt both sympathetic and skeptical. Sympathetic, because I have sometimes been an impatient participant in conversations about, say, why Richard Ford bores me and Jane Austen pleases me and yes I’m a guy but so what? (Weren’t we talking about literature?) Skeptical, because such an emphasis on being “fully engaged with our characters” might risk giving short shrift to language and ideas. I’m wary of turning characterization into something like “identification.” I do not read fiction in search of Facebook friends.

Fortunately, Stripped is a wide-ranging collection and is not easily pigeonholed. Divided into four sections (“It,” “Her,” “Him” and “Them”), the anthology offers forty-seven short-shorts reflecting a variety of sensibilities. Sometimes questions of gender are foregrounded, but not always. When I first picked up the book, I skipped around, which is one of the pleasures of flash fiction collections. Whatever one thinks of the effects of technology on reading habits, it’s true that microfiction is on the ascendant, and Stripped is a solid example of that trend.

After my initial “surfing,” I assumed the duties of a reviewer and sat down and read it from start to finish. Unsurprisingly, it’s hard to generalize about a book with forty-seven different authors. Of course it’s uneven. But the sum effect is definitely positive, both as a comment on Monaghan’s experiment and as an exploration of the current state of the form.

For my taste, the pieces that reached for the macabre were the weakest, sometimes conflating the idea of “flash” with a twist at the end, intended to shock. A few felt like writing exercises, composed in response to a prompt and not to personal artistic urgency. And there were some anonymous pieces where the author’s unknown gender was less a question than a palpable sense of the author’s age. These short-shorts felt, frankly, “young,” with their over-determined references to consumer ephemera or to how parents can be mean.

Such pieces, however, are not representative and Stripped has plenty of  excellent work that leaves a lasting impression. I won’t attempt an exhaustive list, but, among those definitely worth mentioning, here are some stand-outs:

The opening piece, “Boy-Girl,” contains a wider range of psychological complexity than many conventionally longer stories. “Santa Caterina” is suffused with sadness yet invites an immediate re-reading, such is its force. “Go Deejay” forcefully tests the premise of the collection, while “Almost Ivory” is impressive for its unapologetic tenderness.

“The Turn” is a near-perfect distillation of what flash fiction can do. About a couple on the verge of a major experiment in their sexual relationship, the story manages, in fewer than three hundred words, to convey both complexity of character and plot:

“So the car rolls on—beneath railroad tracks, past quiet homes with swimming pools and rope swings, through neighborhoods just like hers—until they reach the house where things will change.

Another favorite is “Locked,” which dramatizes a crisis of faith across generations. A father named Tim is a lapsed Catholic who has agreed to take his young son to a feel-good Unitarian Universalist service, where they are encouraged to find their own “spiritual path.” But memories of his upbringing bring both a sense of dissatisfaction and foreboding: “He felt as small as a child waiting to be let in. Smaller than his small son even…”

Other strong pieces include “Dog Beach,” “Waffles and Honey” and “Let’s Get Together Soon.” Each expresses, in different fashions, longing and loss. It is impractical to summarize so many stories but I confess that, as I read along, I often forgot to wonder about the identity or gender of the author. I was happy just to go along for the ride.

According to Monaghan’s introduction, the byline for each piece will be revealed one year after publication at http://www.writenic.wordpress.com. A general list of contributors is already available at the end of the anthology, revealing a healthy mix of both known and unknown writers. Stripped offers not only good reading. It will offer good rereading, too.

2 thoughts on “Stripped: A Collection of Anonymous Flash Fiction edited by Nicole Monaghan”