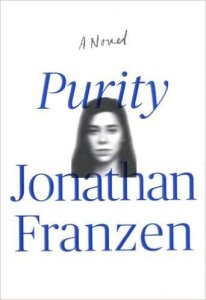 I listened to the audiobook of Purity (FSG, 576 pages) as I was held captive on a thirty-five hour road trip. Although the first fifty pages or so had some wit and interesting characters, such as Andreas Wolf, a Julian Assange persona, Purity soon devolved into stylistically bland chicklit. Jenna Lamia narrates the part of the twenty-something title character, with, appropriately for the writing style, that special millennial lilt that seems to run out of energy at the end of every sentence. The remaining 526 pages were concerned with relationship negotiations between men and women, children and parents. People complain, worry about their self-image, elaborate the details of “he said, she said” and, instead of having interests in the world, all the characters try to control and manage how other people feel about them. The characters are pure self-interest without any self-reflection. Worse yet, the plot is straight about of a women’s drug store novel: Purity’s love relationships fail as she seeks a father figure, having grown up without one. Confronting hard economic times and suffering through dead-end jobs, she finally stumbles upon her father and discovers that she is an heiress.

In the end, Purity, nicknamed Pip with a nod to Dickens, finds true love, forgives her parents and starts a new life with a true love and lots of wealth.

I kept listening only because I had no other choice and I was slightly interested in finding out what Franzen was trying to do with the Andreas Wolf character, who begins his career exposing Stazi secrets after the fall of the Berlin wall. In The Corrections, Franzen has written about the easy transformation of communism into neoliberalism with some ironic humor, but there is not much of that here. It turns out that our Wolf has no interest whatsoever in politics, in truth or transparency and is only in the leak business for the fame.

Wolf seems to have been created to critique the real Assange, who in the novel is dismissed as a sleazy “sex offender.” In real life of course Assange’s actual alleged “crime,” which the press fails to note, is allowing his condom to slip off during consensual sex, but, hey, who needs accuracy when reporting the facts in the mainstream media? Why not continue falsehoods in mainstream literary works as well? Why question the status quo? Why bother to get audiences to actually think? The important thing for Franzen seems to be to affirm what PR firms and lobbyists want us to think about ourselves and our world. Don’t pay attention to Wikileaks. Nothing to see hear; move along.

Pip is budding journalist and her lost father is an editor. His wife is an investigative reporter. There is a failed attempt on Franzen’s part to glorify real “boots on the ground” journalists who don’t just indiscriminately publish leaks like Assange/Andreas. Leakers are mean-spirited and irresponsible. With his representation of contemporary journalism, Franzen has left chicklit and is writing a fantasy novel, since the investigative journalist is an extinct species, at least in the mainstream news, though there are a few surviving in special conditions of alternative media, which today are more like like natural history museums whose function is just to show us what journalism was once like. Does Franzen fancy himself a journalist? Does he hang with the self-congratulating Times and WaPo reporters who haven’t yet figured out that as soon as the baby boomers die off, so will the last of their readership?

The best parts of the novel are those that describe Pip’s pathetic work history before going into journalism. In the quote below, she has a green energy job that turns out to be nothing but a corrupt financial scheme. Franzen is quite good at deflating the green hopes of millennials, fresh out of college, loaded with debt, finding their desires to find meaningful work will likely be forever thwarted. This section reminds me of this best section of The Corrections. The nice touches her are the ironic quotes around “survey” and “product” (the company produces nothing, just takes a referral fee). Pip’s patience and perseverance is revealed in the amount of tedious detail of the first paragraph, followed by the humorous summation of it all as “crap” in the second.

At first, and in hindsight least confusingly, she’d sold power-purchase agreements to small and midsize businesses, until a new state regulation put an end to the outrageous little cut that Renewable Solutions took of those. Then it was signing up households in potential renewable energy districts; each household earned Renewable Solutions a bounty paid by some shadowy third party or parties that had created an allegedly lucrative futures market. Then it was giving residents of the progressive municipalities a “survey” to measure their level of interest in having their taxes raised or their municipal budgets rejiggered to switch over to renewables; when Pip point out to Igor [her boss] that ordinary citizens had no realistic basis for answering the “survey” questions, Igor said that she must not, under any circumstances, admit this to the respondents, because positive responses had cash value not only for the companies that made stuff but also for the shadowy third parties with their futures market. Pip was on the verge of quitting her job when the cash value of the responses went down and she was shifted to solar renewable energy certificates. This had lasted six relatively pleasant weeks before a flaw in the business model was detected. Since April, she’d been attempting to sign up South Bay subdivisions for waste-energy micro-collectives.

Her associates in consumer outreach were flogging the same crap, of course. The reason they outperformed her was that they accepted each new “product” without trying to understand it. they go behind the new pitch wholeheartedly, even when it was risible and/or made no sense, an then, if a prospective customer had trouble understanding the “product,” they didn’t vocally agree that it sure was difficult to understand, didn’t make a good-faith effort to explain the complication reasoning behind it, but simply kept hammering on the written pitch. And clearly this was the path to success, and it was all a double disillusionment to Pip, who not only felt actively punished for using her brain but was presented every month with fresh evidence that Bay Area consumers on average responded better to a rote and semi-nonsensical pitch than to a well-meaning saleswoman trying to help them understand the offer.

This appeared within the first thirty pages of the narrative. The rest is not so clever.