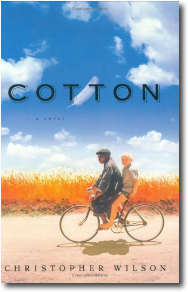 The title character of Christopher Wilson’s second novel, Cotton (Little, Brown, 320 pages) begins life as a blonde, white, blue-eyed boy born of a black mother. Lee Cotton’s problems are compounded by another oddity, his ability to hear the thoughts of both the living and the dead. If that were not enough, Lee discovers that his life holds surprising, even shocking, turns that ensure he will never fit in anywhere. First he survives a brutal, racially motivated assault that leaves him a John Doe, assumed to be white, in a neurological ward, and then, through a series of events, he undergoes major transformations that always leave him different on the outside than on the inside. No matter what guise he assumes, he remains an honest, homespun, good-humored, observant individual–a cross between Forest Gump and Cal from Eugenides’s Middlesex. As one character says, “‘You’re inchoate, Lee. You’re plastic; you’re protean. What happens next?'”

Lee Cotton, rechristened along the way as Lee McCoy, is a misfit with a down-home attitude who has no idea who or what he is, although he doesn’t seem to care much. Some of the other characters are as outrageous as Lee himself: self-destructive Angel who undergoes her own transformations, always one step beyond Lee’s; time-traveler Ethan who claims “you can live as many lives as you like, all at once, in parallel”; shrewd reporter and lesbian Fay who wants more than anything to be loved, just once; Angel’s father Byron who remains a steadfast bigot despite all the lessons he should have learned; Doc, a mechanic and once famous surgeon who now performs illegal surgery in the back room of a local bar; and grandmother Celeste, a wealthy woman from “N’awlins” who practices voodoo and who later talks to Lee from beyond the grave. The characters, with all their exaggerated qualities, fit well with the tone of the novel, for Wilson is not interested in realism but in theme: no one really belongs in his own world.

At times Wilson stretches the reader’s patience with his outlandish plot twists; the sections where the reader must adjust along with Lee to a new reality often cause the narrative to founder. Fortunately for the reader, each time Wilson manages to find his way back to the right balance between character and content through Lee’s first person narration and sensibilities which provide an anchor for the reader. Lee’s voice ensures continuity even if the narrative details do not. By the novel’s end, the reader learns why Lee has undergone these trials, although the somewhat hokey explanation, not entirely unexpected, falls flat because of the shift from the delightful bizarre to a pat inspirational message. Despite the flaws, Cotton remains an inventive and memorable novel precisely because it is so over-the-top.

Excerpt from The Ballad of Lee Cotton

“Eureka, Mississippi, where I got raised, is God’s Own Place to grow cotton and stubborn, hardy trees. Clement Creek cradles the tallest cedars in the state. The nearby town of Briar prides itself as the pine capital of the South

The folk are knotty and resinous too. They sink deep roots. They can handle heat, dust, and drought. Needles fare better than leaves.

Nowadays there’s a Eureka community website. The History page says Eureka has no available history. The Community Information page announces The community has no information to share. The Links page has no links. The Contact Us pages gives a box number in Hannibal, Missouri. The Welcome link leads nowhere.

That’s Eureka folk. They keep things buttoned up, close their chests. They can handle progress if it doesn’t change things. They welcome any strangers who belong. If you come asking questions, they’ll tell you as much as they need you to know.

Highway 28 crosses the tracks. To the north are Clement Street and Front Street. They started to build Franklin Boulevard, but it ran out of tarmac and self-belief after thirty yards. To the south is South Clement Street and Bank Street. They got most things most people need—grocery store, three churches (black Baptist, white Baptist, and never-mind-your-color-pass-the-snakes), two diners, a gas station, a sheriff. And if you find yourself in need of a newspaper, tractor tire, haircut, high school or hospital, you can drive to nearby Briar in less than twenty minutes.

You can see the heat shimmer off the tarmac, hear the rattle of the teal, the whining blades at the sawmill, and a bad transmission Studebaker pickup. You can smell pine resin, sawdust, and hog pens. But the blue sky and cotton horizon look hazy-clear.”