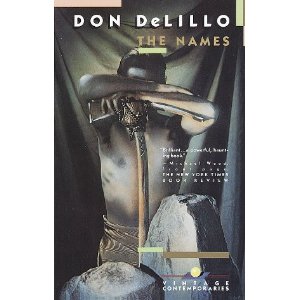 DeLillo surely kept a journal while living in Athens and visiting various places in the Middle East and India. He noted scenes, described the climate and vegetation, philosophized on the locals then published his journal as the novel, The Names

(Vintage, 352 pages), after he added a “plot” about a cult that murderers people for the completely uninteresting reason that their initials match the initials of the place name in which they are murdered. DeLillo also added the equally uninteresting denouement in which it is

discovered that the narrator, who has been described as a risk analyst working for an insurance firm, is actually working for the CIA. The front cover tells us that Michael Wood found this book, “brilliant, powerful, haunting.” It is none of these things. It is tedious and amateurish. The best that the reader could hope to encounter in this overlong ramble is illustrated in the opening paragraph:

For a long time I stayed away from the Acropolis. It daunted me, that somber rock. I preferred to wander in the modern city, imperfect, blaring. They weight and moment of those worked stones promised to make the business of seeing them a complicated one. So much converges there. It’s what we’ve rescued from the madness. Beauty, dignity, order proportion. There are obligations attached to such a visit.

A promising beginning that does not pan out. Instead, a number of notebook entries similar in philosophical tone are trotted out and then abandoned for something else. Most of the novel involves boring reenactments of dinner conversations among businessmen and their wives who all share the narrator’s tone, style, and tendency to philosophize. It’s as if DeLillo was too embarrassed to give one character all the weighty thoughts and so distributed them around the table as in a card game. When he gives the weighty dialogue to his first-person narrator, this is typical of the way it’s handled. This exchange occurs a few pages after the above quote about the Acropolis.

“Climb the hill, James. The thing is right there. It looms. It’s close enough to knock you sideways.”
“That’s just it,” I said. “That’s the point.”
“What do you mean?” Ann said.
“It looms. It’s too powerfully there. It almost forces us to ignore it. Or at least to resist it. We have our self-importance. We also have our inadequacy. The former is a desperate invention of the latter.”
“I didn’t know you were so deep,” she said.

DeLillo inserts the “I didn’t know you were so deep” to beat would-be critics of the clumsy dialogue to the punch. No one says things like this. People think such things; they write such things in journals, but they don’t say them (unless they’re pretentious bores). The “What do you mean” is also unforgivable as a device to elicit a philosophical remark.

Sure, the book is probably better than commercial fiction. But that’s not its genre and there is a higher standard against which it must be compared. DeLillo is usually regarded as a literary figure. In general, I did not find his technique artful, interesting, or well-considered. It is true that he has more than a few nice paragraphs and does a good job characterizing the narrator’s son, but most of this novel is not worth the effort of turning the pages.