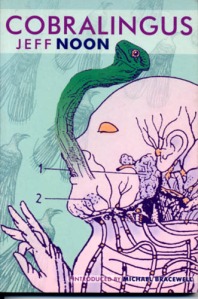 William Burroughs and Terry Southern’s cut up techniques were a bit too oblique to me. Supposedly cutting up classic texts and resuturing them together like the two halves of a car chop shop, while certainly creating a new text, but was also supposed to maintain echoes of the original ghost texts working under the surface. The problem for me was that I couldn’t locate any of the original texts, not being that well read classically, so that I didn’t get any undertones.

In Cobralingus (Codex, 120 pages) Jeff Noon provides the reader with the classical texts he cuts up here, so straight away the echoes are more readily resonating. He lists a set of functions by which these texts may be mutated, be it by the gentle ‘Decay’, the more violent detonation of ‘Explode’, adding the stimulants by ‘Drug’, or the evolution of ‘Release Virus’. What Noon does here is brilliantly take you through from the original ‘Inlet’ text, through a series of word manipulations (and even breaking words down into just letter fragments) into a wholly different final ‘Outlet’ text, but he shows you the steps in between and thereby lies the essential brilliance of the book. You can follow the creative visions and linguistic processes of an author who explores the possibilities of language like no other contemporary writer. He breaks language down to the building blocks of its alphabetical DNA and then rebuilds a new creation.

So we get Shakespeare’s “Taming Of The Shrew” filtered through a real life list of horses from a racecard, melded with a Zane Grey piece from 1912 to end in a meditation on language itself. In another, a list of the landmarks of our moon, (all the Seas, Bays and Lakes) is blended with a shipping forecast as broadcast on BBC Radio, the numbers replaced by key words, to arrive at a bee’s honeycomb arrangement of phrases.

Some of the final products are graphically/typographic representations and arrangements of letters. Others are classical poem or prose narratives. The title derives from a lipo, a poem ultimately constructed only using the 11 letters in the word ‘Cobralingus’, a series of wondrous anagrams.

Any reader interested in how our language works should read this book. That’s if you can get hold of it as it’s been out of print and isn’t Kindle friendly, though Twitter conversations with the author suggest he may try to release a tablet version of it.

“The Hermit
The night is crawling with sparks. I can’t sleep. Bad dreams. The heat and the sweat. Flesh prickling with itches, like Braille insects. I end up taking a three in the morning cold shower. Fifteen, twenty minutes, until the water jet weakens to a dribble. Too many people with the same idea; maybe in every room of the hotel, all the lonely people trying to get clean.

The Star
The face in the bathroom mirror, it looks ravaged; as though something alive moves beneath the skin. I can’t stop my cheeks, my right eye, the ligaments of the neck from pulsing, rapid. A demon Morse code, all over the body. i take the usual shock off the taps; electrons making their brilliant arc between metal and skin. Five minutes since the shower, it’s started again.

The Tower
The window opens a two inch crack, no more. I press my mouth to the gap, breathing the night’s chemical air. I’m on the tenth floor, watching all the lights flicker on and off, the crackle and buzz of the city. Lightning scissors down onto a neighbouring building, seduced by a radio antenna. The slashed air. Thunder rumbles overhead. But no rain. No fucking rain.”