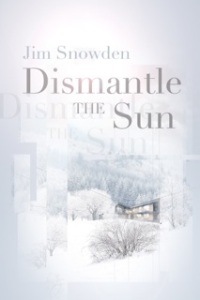 “Someone had to die for Hal Nickerson to live in the house that he and his wife Jodie bought for a song seven years ago.” So begins this dry-toned, cool, and detached novel Dismantle The Sun (Booktrope Editions, 324 pages) with a line and a sentiment that prove to be something of a mantra for its main protagonist and a lynchpin refrain for the narrative arc. In the world of nature — in the world of man — something has to die for something else to live. Some persons — the Nickersons — include this in their ample proof of the non-existence of a beneficent Creator, while others — the fundamentalists — attribute the state of the cosmos to original and ongoing sin. Both take it all very personally. Hal Nickerson’s atheism in conjunction with that of his wife informs all of his sensibility while providing a certain distance from the most basic issues of life and death, love and hatred.

As rational nonbelievers they try to live as much in accord with the laws of nature as they perceive them. Their aforementioned house had been designed in the clean spare fashion of the architects Mies van der Rohe and Frank Lloyd Wright:

“The cold inhumanity of Bauhaus fit well with Lloyd Wright’s desire to build in harmony with nature because Upper Michigan was a frozen despairing waste six months out the year.”

Hal is, however, less enamoured of their choice than is his wife who was responsible for much of his intellectual liberation from a fulminating preacher parent (“away from the One True Faith”). Not without some trepidation he also yields when, laid low with a fatal disease and in an apparent bow to human biological needs, she sets up a liaison for him with a female acquaintance. Absent an emotional component, her strategy proves ineffectual (“She wore some kind of perfume, I think. I’ve got all the windows open trying to get it out.”). What raises his libido is a more immediate and youthful promise of satisfaction as seen in this example of accomplished prose:

“A thin young woman just inside the doorway wriggled out of her drab grey parka as Botticelli’s Venus might have if Botticelli had lived out his productive years in Upper Michigan. This auburn-haired temptation wore a brown threadbare sweater and blue jeans; she was like the Hope Diamond wrapped in butcher paper.”

When he does fall in love with one of his students who is, ironically, immersed in the belief system of her own fundamentalist father, both Hal and his wife Jodie find that they are confronting existential issues with little more than theoretical assertion:

“We are a product of our minds. We’re what our minds do. It’s probably worthwhile to try seeing things that way.”

“Jodie chuckled softly, ‘And you say you lack dignity. To think I’m afraid of a life without you. Who the hell are we, Hal? Can you please tell me who we are?”

On more than one occasion Hal poses the same question to himself, the most climactic being when caught in flagrante delicto with his young student:

“His life was in danger from a fat man in pajamas who seemed to be deciding who he’d like to kill first. These things did not happen to the Hal Nickerson he knew or recognized. He must be someone else. Who am I, he asked, that the world talks to me this way?”

A work such as this — replete with ideas, and drawing upon a broad range of literary and philosophical references — would perhaps do well in places to heed the poet Blake’s advice regarding the folly of generalization and take more care to avoid statements such as the following:

“To wish someone long life was to wish despair upon them.”

This sentiment might be understandable if one were, say, no more than a student of Shakespeare’s tragedies — particularly the demented world of a Lear — and somehow have missed the redemptive perspectives of a Leontes (The Winter’s Tale) or a Prospero (The Tempest), fashioned in the Bard’s ultimate maturity. Snowden’s erudition is not narrow. The human spirit alone deserves more.

At one point in the story’s unfolding of Hal’s sensibility, we are told,

“The degree to which his attitude changed with his blood sugar level was one of the first things to convince him that his consciousness wasn’t separate from his body.”

With this interconnectedness, the question remains to be addressed as to the implications of the reverse. It would seem, as Hal falls out of love with his dying wife, that only one answer is possible, and it comes as a kind of revelation — however secular — when something other than material intervention brings his wife back yet again from the brink of death. She shows little sympathy for his having placed his affections elsewhere — apparently something other than pure biological necessity is at work for both of them:

This is not unlike the experience visited upon Shakespeare’s romance figures whose relationship to their children (Perdita in The Winter’s Tale and Miranda in The Tempest) transforms their tragic circumstance.

Ironically Hal finds himself in the same dilemma as his fundamentalist parent who says at one point about his second wife,

“I care more for that woman … the one you called my whore, than I could for a thousand of you.”

Hal thinks similarly of his own new passion:

“The same burning hand that wrote mene mene tekel on a wall wrote this on every atom of every molecule of every chromosome in every cell of his body.”

Suggestive of just how much believers and nonbelievers have in common, he often has recourse to this kind of biblical reference or religious terminology in order to describe his experiences (“… It was not a force that could be resisted without terrible damage to the soul — Hal hated to be mystical about it but could think of no secular way of expressing the idea.”) Both camps find it impossible to entertain a relationship with someone not possessing similar views. Neither seems to quite understand a universe of complete freedom one of whose infinite possibilities may very well be the creation — “invention” — or discovery of a human soul:

“The thing most fearsome about death was that it threatened to erase all we knew and all we were. It was this fear that led to the invention of the soul in the first place.”

Is it fear alone or do we feel that promise within ourselves? Is this the greatest challenge that drives us as a species? Despite all our learning and advances, each individual, it appears, needs to start at the beginning:

At times Hal comes close to endorsing a metaphysical sensibility in addition to his rational paradigms:

“They lived … as a universe of two, and as long as that was so, every lunatic word ever spoken in support of mad passion was as sensible as Euclid’s most delicate proofs.”

“A man’s life is a closed system, subject to the laws of thermodynamics and a guaranteed victim of entropy in all its loves and interests.”

He labours under the assumption that a God would have created a different kind of universe:

“A while back he’d read a story of a star in Pegasus that stripped its innermost planet of 10,000 tons of surface material and atmosphere per day.”

Snowden sprinkles his character’s bleak reflections with what is always redemptive — humour especially in the darkest moments:

“‘Things could be better,’ Hal took a bite. It tasted so good he felt instant depression at the knowledge that the universe, his life, and this sandwich were all finite, ‘This is a good sandwich’.”

The title Dismantle The Sun comes, of course, from Auden’s famous poem of loss “Stop all the clocks …” also quoted in the film Four Weddings and a Funeral. However, in both movie and novel, the bereaved do find that they can love again. The nature of the love itself will have to answer what this imports for life’s greater issues. In a desperate attempt to restore the feelings that have died in the face of his wife’s long-drawn demise, Hal acts in recollection of his father’s words:

“‘Son, you just make the gestures and the feelings take care of themselves. The spirit just comes over you.’ Hoping that for once his father knew what he was talking about, Hal grabbed Jodie’s frail, bony hand and clasped it tight.”

It is always something of a mismatch when intellectuals critique the fundamentalist religious hucksters in society who maintain patently refutable positions. The phenomenon is not unlike watching an adult stoop to argue with a child as to the non-existence of Santa Claus. In the end, of course, intellectual might cannot undermine the human drive to transcendence whether its ultimate means be through science, religion, or a combination of the two. Really the only excuse for the Richard Dawkins, Bill Mahers, and Julian Barnes of the world for their publicly engaging in this manner would be in order to dislodge such archaic beliefs from the substantial hold they maintain over large segments of society. In a parallel to the Pauline injunction, “Put on the whole armour of God … For we wrestle not against flesh and blood, but against principalities, against powers, against the rulers of the darkness of this world, against spiritual wickedness in high places.” — Ephesus (6:11,12)

Jim Snowden takes up the same cause in Dismantle The Sun where he draws upon a broad grounding in the humanities in order to marshal the forces of human reason and scientific evidence against the primitive fundamentalism that has made little advance and, in some quarters, become more horrific in its positions since biblical times. While his sympathies would appear to be firmly in the atheist camp, there is no lack of integrity in his presentation of its shortcomings before life’s mysteries. Consummate writing does justice to this compelling, sustained, and acutely resolved drama.

PaulXylinides, author of The Wild Horses of Hiroshima, 2014