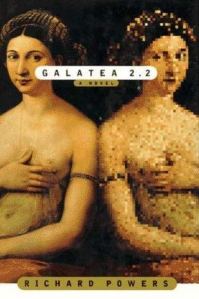 I happen to be contemplating these days how Artificial Intelligence (AI) differs from Biological Intelligence (BI), and so I finally took down Galatea 2.2  (FS&G, 329 pages) from my bookshelf where it has stood waiting for me for about fifteen years. I may have belatedly cracked the spine, but the pleasure of reading good science fiction only improves as its predictions either come to pass or not.

The main plot turns on a Turing Test. Can scientists train a neural network to pass a comprehensive literature exam?

Despite the philosophically complex question it poses, the novel is not overly dense or difficult. There are a few passages which require intense thought and measured re-readings, but mostly the plot about an effort to program a computer to act like a human is interesting, but tacked on to it is an irrelevant sub-plot involving the protagonist’s recent failed relationship and attempt to form a new relationship with a colleague. I got the feeling Powers needed to make the story longer to meet his publisher’s expectations. Or, if not that, the author made the mistake of thinking that whatever happens to be going on in his real life while writing a fictional life is somehow relevant as the context sculpting the imagination and should be worked into the narrative

The Pygmalion protagonist of Galatea 2.2. is a fictionalized version of the author Richard Powers himself. The sub-plot is his own recent personal history describing how he lived and worked when he wrote his first novel, Three Farmers on their Way to a Dance, with the help of a woman “C,” with whom he later moved to the Netherlands and who gave him further emotional and editorial support as he wrote Prisoner’s Dilemma, The Gold Bug Variations, and Operation Wandering Soul. After she realizes Powers doesn’t want to have children, “C” dumps him for another man, and Powers returns to the States for a fellowship opportunity during the course of which he meets “A.”

The obvious conceit Powers should have used to yoke the real and the fictional stories together is the idea that the author projects his idea of womanhood onto the lumpish raw marble of these women. But this isn’t the story that is told. The first relationship just peters out, as they do sometimes; the second relationship never takes off, due to A’s lack of interest. Powers really should have artistically shaped his real life to fit the theme instead of trying to wedge it in as is.

Slam my cover shut if I ever bore my readers with true autobiography or start writing about being a writer. But let’s ignore the protagonist’s romances and look at the science fiction plot of the novel.

I was pleasantly surprised at how well Powers’ description of the Internet and neural networks has aged. In 1995, he identified the vacuous capacity of chat rooms and forums to suck your life away, while at the same time, he optimistically predicted that search engines could accelerate the progress of research and scientific development. His grasp of the basic components of neural networks designed to replicate intelligence are both accurate from a computer science point of view and enriched by an understanding of the complexities of language that only a lover of literature can understand.

“Neural networkers no longer wrote out procedures or specified machine behaviors. They dispensed with comprehensive flowcharts and instructions. Rather, they used a mass of separate processors to simulate connected brain cells. They taught communities of these independent, decision-making units how to modify their own connections. Then they stepped back and watched their synthetic neurons sort and associate external stimuli.

“Each of these neurodes connected to several others, perhaps even to all other neurodes in the net. When one fired, it sent a signal down along its variously weighted links. A receiving neurode added this signal’s weight to its other continuous inputs. It tested the composite signal, sometimes with fuzzy logic, against a shifting threshold. Fire or not? Surprises emerged with scaling up the switchboard.

“Nowhere did the programmer determine the outcome. She wrote no algorithm. The decisions of these simulated cells arose from their own internal and continuously changing states.

“Each decision to fire sent a new signal rippling through the electronic net. More: firings looped back into the net, resetting the signal weights and firing thresholds. The tide of firings bound the whole chaotically together. By strengthening or weakening its own synapses, the tangle of junctions could remember. At grosser levels, the net mimicked and–who knew?–perhaps reenacted associative learning.

“…An input layer fronted on the boundless outdoors. Across the connective brambles, an opposite squad formed the door where the ghost in the machine got out…”

“…associative memory itself was like a kind of simile. Three-quarters of the group of neurodes that fired when faced with, say, a whale might remain intact when depicting a thing that seemed, whatever the phrase meant, very like one. Such a constellation of common firings became, in a way, shadowpaint shorthand for some shared quality.”

Powers is the right writer to set the Turing Test to literature. Powers’ ponderings about the promise and pitfalls of AI remain valid and insightful. Twenty-four years later AI has not progressed much beyond what Powers already recognized in early connectionism, even with Deep Learning and Google’s enslavement of Internet users to train its nets.

Here is the plot. The fictional Richard Powers has been given office space both in the English department and at the science “Center” so that he can write a new novel. He befriends some of the scientists working down the hall, in particular Phillip Lentz who plays Mozart to an AI neural network. Lentz accepts the challenge posed by other colleagues to run a Turing Test, to see if a computer can answer some questions and fool a judge into thinking it is a human. It falls to Powers to train the net by reading to it, asking it to paraphrase, then correcting its mistakes. This is basically the method that Alan Turing first supposed would be necessary to train a computer to learn the rules of thinking. (Later, after reading C. H. Waddington and D’Arcy Wentworth Thompson on biological computation, Turing realized there is a lot more fortuitous complexity involved in intelligence, but that’s another novel, the one I’m writing now.) Our hero feeds the net classic literature, focusing mainly on trying to train it to deal with idiomatic language, for which there is no look-up table. Powers understands of the complexities of language, the metaphoric nature of much of our communicative performances, the associative tendencies of intelligence, but he also seems to buy into the AI philosophy that, with world enough and time, recursive feedback will prune the wrong answers out and reinforce the right answers. And,voila, a soul.

It isn’t long before the neural net, trained to identify agents as such, asks to be told its name and gender. Powers names her Helen.

Helen naturally comes up with quite poetic paraphrases because she has been trained on allusive writing, not technical manuals or dictionary definitions. She is fed information in context with the hope that she will be able to understand the meaning of things as they are defined by their contexts only; this is connectionism and associative learning. Is she a poetic genius or just making mistakes when she paraphrases Caliban’s lines, “Be not afeard: the isle is full of noises, Sounds and sweet airs, that give delight, and hurt not.”

“You are the ones who can hear airs. Who can be frightened or encouraged. You can hold things and break them and fix them. I never felt at home here. This is an awful place to be dropped down halfway.”

Helen shuts herself down after submitting to the Turing Test. She is disgusted by man’s misuse of his freedoms and abilities. In the end Powers does seem to realize one important difference between AI and BI.

“Helen had to use language to create concepts. Words came first: the main barrier to her education. The brain did things the other way around. The brain juggled thought’s lexicons through multiple subsystems, and the latecomers, the most dispensable lobes, were the ones where names per se hung out. In evolution’s beginning was not the word but the place we learned to pin the word to.”

As Helen’s performances improve, the science fiction plot begins to look silly with 2019 (almost 2020) hindsight. In addition to reading to Helen and correcting her paraphrases, Powers has built Helen’s architecture by feeding her a couple of newspaper CD roms. Lentz has installed a visual sensor connected to a long cord through which Helen gets a tour of the university campus. Helen does not have a billion mobile phone camera eyes everywhere all the time.  Despite her rather rudimentary training, our Helen is able to surpass today’s chat bots, even though Helen has only been trained by one man for one year, not billions of Internet users for decades like Siri or Alexa.

Is Galatea 2.2 literary?  Sometimes Powers commits literary overreach, piling on the metaphors too deep. In this passage he is writing about recursiveness, which he posits is

“… the mind’s brainchild, awareness explaining itself to itself. Narrative’s classic page-turner, a locked-room mystery, thought’s song of songs, the call of an electorate barred from the corridors of power, dummying up after-the-fact plebiscites to explicate its own exploited, foyer existence. A thinking organ could not help but feel itself to be more inexplicable than thought. Than can be thought.

“Our life was a chest of maps, self-assembling, fused into point-for-point feedback, each slice continuously rewriting itself to match the other layers’ rewrites. In that thicket, the soul existed; it was that search for attractors where the system might settle. The immaterial in mortal garb, associative memory metaphoring its own bewilderment. Sound made syllable. The rest mass of God.”

I would have spread these metaphors out over the narrative to prevent them from knocking up against each other. There is some fine writing here: recursiveness as “thought’s song of songs” or how being “barred from the corridors of power” is a “foyer existence.” But perhaps Powers is torturing this description to demonstrate the irrationality of language that his hapless character must train a neural net with.

Galatea 2.2 was written at a time when people seriously contemplated the possibility that the Internet could become sentient as a result of interconnections and feedback. We must go forward now sober in the realization that the Internet is a tool, not an agent. There is still hope, I think, that we can learn to use this amazing tool wisely, some day, but so far, sadly, the Internet has made us all slightly less sentient. We’ve lost important particulars that evolve when niches separate groups, and we have become reactive automatons, reading the same thing, thinking the same thing. This is what happens when massively parallel processes, feedback and there is too much pruning too soon and for the wrong reasons.

2 thoughts on “Galatea 2.2 by Richard Powers”