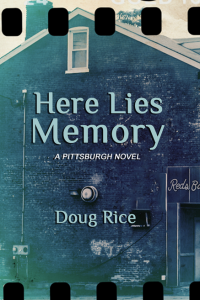 Long form art in any medium seems to be losing the battle of immediacy and a novel that demands its reader to devote oneself to be silent and exist has the odds stacked against it. With Rice’s novel Here Lies Memory (Black Scat Books, 316 pages), those who allow themselves to simply be will find a haunting beauty in the lives of the characters, in their pasts and within each carefully chosen word.

The first of an in-progress trilogy about his hometown of Pittsburgh, Here Lies Memory  marks a departure for the often avant garde Rice towards a linear, traditional narrative structure though the characters are anything but traditional. Doug Rice studied under John Gardner and it seems the meticulous understanding of character Gardner used has found its place in Doug Rice’s novel. It is within these characters that the sanctity of memory is displayed and this can only be achieved if the writer truly knows and empathizes the very soul of the characters. Here Lies Memory focuses on a mix of multi-racial, multigenerational characters who remain stagnant and, for some, paralyzed by trauma and memory.

The novel begins with Fred and Debra, a married couple burdened with the nightmare of their young son, Lucas, vanishing. We, as readers, enter into their marriage after this loss. A marriage where the two exist within the same house, silent, sometimes intimate as if by chance, while Debra clings to hope of finding Lucas while Fred drinks beer as if to engage in communion. Each stuck in stasis as the pain of memory wedges between them.

The other primary narrative shows us Elgin, an African-American Vietnam veteran who willfully choose to go blind rather than fight to maintain his sight. Aside from the war, he has encountered his own personal loss of losing his Vietnamese wife and daughter and all that remains is his grandson Johnny. In Elgin, memory and time exist simultaneously and the narrative exists in a way that the present and future cannot be unless memory inhabits them. For Johnny, he’s young and looks forward but seems to receive the generational curse of memory from his lineage.

All of these characters and the ancillary figures who enter into the narrative do little in terms of action. Fred and Debra often are phantoms in their own home in the shadow of the children’s bicycle in the front yard and Elgin simply sits, lost in the jungle or memories of his wife and daughter. Yet, this lack of motion and movement is what forces the reader to come in to Elgin and Fred and Debra’s memories and absorb the wandering, the thirst for movement, for touch, for anything other than memory and the salt it sprinkles into wounds. By the end of the novel, the reader feels as if these characters were friends, neighbors or even family rather than fiction.

Where these characters wander is the unspoken character of Pittsburgh. A living, breathing city whose very buildings and streets and roads are imbued with a hardened history and sanctity that Rice makes the reader feel with each sensory detail. The city is not the setting, but a character who embodies the struggles of its characters, burdened with its own trauma (the loss of Roberto Clemente) and memory.

The beauty and the struggle of this novel lies in the craft. The authenticity of the characters, their histories and their pain along with the city of Pittsburgh can feel overwhelming. Without much movement, the novel can suck us into this stasis where we feel paralyzed in a way, assuming the burdens of loss and memory that are not our own. The very sentences cause us to read and feel each word which can be emotionally exhausting. Yet, can this be a fault of the work or have we simply become numb to stagnancy to allow ourselves to feel so profoundly?

Here Lies Memory is a challenging novel to read in all the right ways. From craft to character, Rice brings the reader into his characters’ memories in deeply effect ways and forces us to question the pain of certain memories as a bad thing. After all, as Debra’s brother, Bob, says, “Pain is part of it. Makes you remember that you are not the only one who knows pain.” Pain, beauty, memory form a symbiotic relationship and to shirk our very pasts, regardless of a the hurt, is a form of suicide. After all, “the most direct, most intimate form of suicide is the loss of memory.”

Excerpt: “The Street Elder waited for Johnny to say anything. “You pray your life away for that one love,” she went on. “Then one day that love appears, it comes to you. Stands there in front of you. You see it and you move on toward it, wanting it, thinking this is what you been living for. This is what life is about. That love wants you, and you want it, so you move to it. You got no idea what you’re going to learn. What all it will do to you, to all of who you is. But you want it, so you go after it. And whatever it is that happens when you experience that love you been wanting, you won’t ever be able to forget. Not in a lifetime of forgetting. You find out more than you thought possible or you find out something you dream you could wish away the knowing of it. But you can’t. It’s what you can’t know about any of this until it’s too late, then, like it or not, you know it. You can’t just walk away from knowing, once you decide to walk toward it.” “T.J. never did anything to me or to no one,” Johnny said. The two of them held onto their stares. Each looking for something that the other was keeping invisible. “Your mother?” She asked. “You ever try,” but she stopped. Johnny’s lips moved slightly, like they had been tickled. He couldn’t say anything. Words aren’t made for talking about mothers. Those words stay stuck in bone and heart. No breath can bring them out. “One of these days, you’re going to try to forget something that someone’s done to you. Especially something you felt on your skin or with your muscles, your heart. Knives. Matches. The butt of a cigarette. Love. A paper cut. Something someone left behind with their teeth. A time someone said something about loving you, about adoring you. Then leaving. The kind of leaving that keeps the memory of it in your skin.””

One thought on “Here Lies Memory: A Pittsburgh Novel, by Doug Rice”