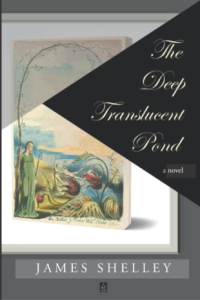 In James Shelley’s The Deep Translucent Pond (Adelaide Books, 192 pages), the Black Magus, “Cleveland’s greatest poet since Hart Crane,” is getting on in years and mentors his last two aspiring poets in an esoteric fellowship program known as the Triangulum. The Black Magus explains,

“The Triangulum Galaxy is the most distant light we can see with the naked eye. It contains a nebula, NGC 604. Radiation from new stars blows holes in the nebula, providing a view into its black interior. A star-birthing factory…The Tenth Triangulum’s first order of business is to understand holes.”

With references to Da Vinci’s Last Supper and triangles as the most stable shape, the novel opens with elements that are reminiscent of The Da Vinci Code. Jerome Konigsberg, one of the poets who has won the fellowship on the basis, in part, of a poem titled “The Regaining,” presents the poem in an introductory session:

I am realistic enough to know
If I stumble upon The Grail
It won’t be a chalice, haloed in
radial spokes of blinding white

Scanning the horizon for rescue:
the next shimmer of light.

However, the quest here seems to be an inward one as details about Jerome’s background are revealed. One of those details is that he has come to the Triangulum after “abandoning conventional therapies to address his ‘disorder,’ the only shared terminology in differing pronouncements from three psychiatrists.”  But, in abandoning them, he still searches for a way beyond cynicism and literalism, which he has uneasily embraced.

The other fellowship recipient, Natalija Gasper, also comes to the Triangulum on a sort of quest. On a trip to her maternal homeland of Slovenia, Natalija seemed to be on the verge of an epiphany, a reinvigorated sense of herself and her place in the world, but “something within herself suddenly changed. It started as a sagging of inside weight. Then, internal bindings began snapping, one after the other. She soon lost feeling in her legs.” When this anxiety returns with her to Cleveland, “she intuitively knew: whatever it was she was searching for did not exist.”

The two of them come to the Black Magus and to poetry to supply what’s missing from their lives. But the Black Magus himself is no stranger to breakdowns, and his eccentricities are such that it is tough, especially for Jerome, to take him seriously at times. The Black Magus is, after all, not unfamiliar with mental institutions, a man who “one or twice a week while sleeping…feel[s] the Night Daemon sitting cross-legged on his chest” and has a “Reliquary…to house his epiphanies.” However, as his backstory gets deftly filled in, he is effectively humanized and his pronouncements achieve a sort of retrospective heft.

One of the interesting things that develops during the ten-week course of the Triangulum, which is organized according to ten books (The Book of What Is Missed, The Book of the Sacred, and so on), is the former relationship between the Black Magus and d.a. levy, a seminal figure of the Cleveland poetry scene in the 1960s, who shot himself to death at the age of twenty-six. Since levy and the Black Magus were one-time poetic rivals, I found myself wondering if the Black Magus was also based on an actual poet. When I read, for example, that “The Black Magus launched into a discussion of tribal rites of passage and how they had disappeared for both males and females,” I instinctively thought of Robert Bly, but his life did not seem to dovetail with levy’s in either time or place. At other times, considering the suicides of levy and Hart Crane, who jumped off a ship into the Gulf of Mexico, I saw elements of John Berryman, who committed suicide by jumping off a bridge in Minnesota. But, again, the details didn’t seem to quite cohere. Whether the Black Magus is based on an actual poet or not isn’t that important, but it does add a speculative, parlor-game sort of dimension to the character.

What is important is how the specters of mundanity and mortality weave in and out of the narrative and how the three main characters come to poetry to help negotiate their various confrontations with the specters. For Jerome and Natalija, the Black Magus is essential to clarifying what these negotiations might entail. Responding to Jerome’s poem “The Great Dissolving,” which he delivers in The Book of Slow Leaks iteration of the Triangulum, the Black Magus says, “You like to think there are neat horizontal divisions measuring your life. You are probably fascinated by cross-sections of trees that have been cut down. You like counting the growth rings…Stop being mesmerized by watching your life congeal and harden.”

Responding to Natalija’s poem “Snapping Through,” which she delivers in The Book of Waking Up iteration of the Triangulum, the Black Magus says, “Men who survive big cat attacks recall a zen-like acceptance at being snugly clamped in the jaws of something inescapably powerful.” Such declarations help Jerome and Natalija along their paths. The question becomes: Who will help the Black Magus confront what has been haunting him?

In The Deep Translucent Pond, James Shelley has constructed a taut, compelling narrative whose mystical investigations and the poetry that gives them form owe much more ultimately to William Blake than they do to Dan Brown.