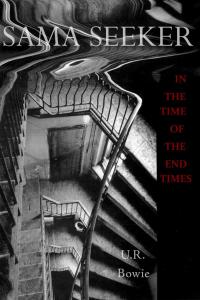 The year is 2002, the devastating attack of 911 in New York still reverberates. Osama bin Laden is in hiding. Defense Secretary Rumsfeld says, “If he’s alive, he’s somewhere?” In reply, President Dubya Bush squints and makes threatening gestures. The U.S. government marshals all its forces to find and kill the archenemy of Western Civilization. Urell L. Buies, Ph.D., a college professor with a sideline of decades in low-level intelligence operations, is recruited to work with Russian intelligence in Central Asia. The Russians promise they can find Osama. While in Samarkand, Uzbekistan, doing little more than waiting for something to happen, Buies begins writing a long account of his formative years and his life as a double agent. Or what he terms, ironically, “a double non-agent.” As the story of his life moves closer to present time, the narrative moves to the climactic point: the day the Russian helicopter goes in after Osama.

Once again, using a multiplicity of influences from classical Russian literature, U.R. Bowie creates a fascinating imaginative world. In a novel that looks backward to the nineteen century, backward to a Florida childhood in the forties and fifties of the twentieth century, then forward to events culminating in the assassination of Osama bin Laden in the twenty-first, we are offered wit, intelligence, richness of detail, quirky characters, and an impressive grasp of Russian history, literature, arts and culture. The echoing, overlapping stories—but, more impressively, a large array of characters—draw in the reader and lead gracefully to a powerful crescendo. The author deftly manages the trick of scope, hitting all the right notes to sound out the big picture, while making us hear, feel, and commiserate with the people at the heart of the interwoven tales.

Don’t bother reading all the blurbs that go with the paperback edition of this book (The Sympathizer, Grove Press, 382 pages). Just read the first page; already you know you are in the presence of a talented writer. Here’s how we begin:

“I am a spy, a sleeper, a spook, a man of two faces. Perhaps not surprisingly, I am also a man of two minds. I am not some misunderstood mutant from a comic book or a horror movie, although some have treated me as such. I am simply able to see any issue from both sides.” END_OF_DOCUMENT_TOKEN_TO_BE_REPLACED