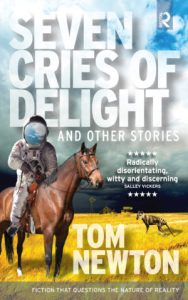 Newton’s collection of surreal stories, Seven Cries of Delight (Recital Publishing, 170 pages) was nominated by Brent Robison who, in his review, writes, “As legions of MFA students busily workshop their childhood drama into market-friendly ‘realistic’ fiction, Tom Newton has clearly been following a different muse.” At Dactyl Review we value unique and eccentric talent and our readers will find those few authors writing today who aren’t trying to appeal to the most common of those dominating the market. Newton appeals to a special literary taste, to those whose minds tend to wander, who question the act of thinking itself and who often catch themselves in the act, examining the form and structure of the process of meaning-making. In short, Newton writes about thought-art.

Many of our readers will have noted at some point that the mechanisms of meaning-making—before they are edited by the relatively small, conscious part of our brains according to logical relationships—are dream-like. Our sub-conscious brains tend to organize things according to similar qualities (everything with a spiral may be grouped together, from galaxies to thumbprints) and spatial proximity (anything that was in the room at the time you experienced something may be linked to that event). I note that this means that our brains are fundamentally dream-like and therefore surrealist literature, far from being strange, may be considered the everyday sort of reality for the most fundamental part of our animal existence. Surrealism isn’t nonsense; it reveals a special thinking-sense, which makes it an important part of literary writing.

The collection explores a few different themes. The act of imagination is a common theme. Characters can bring things into existence. Another common theme is the character who contemplates life according to some scientific or aesthetic theory. Most of the stories in the collection are narrated from deep within the interior of a focal character, either in third or first person, and most of the action is the musing that goes on in the head of the focal character while he/she is on his/her way somewhere or engaged in other activities. In “Intervals,” the character—as he goes to meet his girlfriend for dinner (who often never shows), eats without her and then walks home again—plays with an extended analogy comparing human relationships to musical fifths and fourths.

The streets are just as busy. I look around and wonder what interval would express my relationship to people I don’t know. Could I assume that the veil of ignorance would be an homogenizing influence and render the same result for every stranger? Knowing not to assume anything, I imagine the same interval would suffice for all. It would have to be a Perfect Fourth. I like the sound of the name. That’s one good reason. The connection of that particular adjective with the unknown is deeply pleasing. The number four suggests a square. That combination of straight lines is surprising. I would expect the unknown to be murky with unclear borders and better suited to curves. But the square is one facet of a cube, which is the form of a die. Dice are tools that allow chance to manifest as numbers. So with a little tortuous reasoning I can make the number Four represent chance viewed in two dimensions.

This is a kind of mental play that creative people may engage in frequently, but, I suppose, some people may not entertain themselves in this way. Part of the play involves self-conscious observation and critique. After making an extended analogy or imagining up a complex set of circumstances, the focal character may think, “He did not believe in any of these thoughts.”

What Newton seems to do most often is make the ordinary strange or the strange ordinary. He uses a number of different techniques to accomplish this. “Mr. Moreno’s shoes” begins “Luis Moreno ate his own shoes—both of them” and then the narrator proceeds to tell a tale that makes sense of this act in a way that reminds me of Gregor Samsa’s resigned acceptance of his metamorphosis. “The Buried Queen” begins with the hook, “A queen was buried beneath the threshold. Jenny had been stepping over it for years without knowing what lay below. Builders had made the discovery while digging down to repair the foundations” but as soon as he introduces that intriguing information, Newton, drops the topic, proceeding instead to relate Jenny’s story about her relationship to her home, which her family has occupied for seven hundred years. Some several pages later we learn the queen is “made from a mixture of plaster and resin, most likely cast from a medieval mould, now lost.” At this point Jenny is the real object of the tale, not the buried queen. Newton is doing interesting things with readers’ expectations.

Another technique Newton uses to estrange the reading experience is to shuffle the normal order of sentences in a paragraph. For example, here a surprising and strange detail comes before the fact that makes sense of it.

Jack Weir was very familiar with water. He listened to it coursing below the city streets almost every day through a hollow stick with an earpiece attached. His job as a Water Board inspector caused…

Several of Newton’s stories end with a reversal of some sort—but the reversal may or may not reverse what appears to be the main focus of the story, but merely a side-effect or sub-plot of of the main action. This story featuring Jack Weir, which is titled, “Bowing, Genuflection and Water” is about those two related topics and the unrelated one. In the narrator’s mind, water and submission are related according to a sub-conscious mechanism. Since childhood, his eyes have tended to tear up when confronted with a figure of authority. The story is just a day-in-the-life of Jack Weir who has a (rather strange) job at the water works department, and he reminiscences while he goes about his tasks, walks home and then goes out for a ramble with his dowsing rods for pleasure. The drama occurs when he is confronted by police who are looking for a burglar with muddy shoes. Jack’s shoes are muddy because he’s been walking by the river with his dowsing rods. Jack’s eyes tear up, which makes the police suspicious. The policeman questions him about owning a dog. Apparently the burglar’s tracks were accompanied by dog tracks. Jack says he does not have a dog and is allowed to go his way. The story ends with an ironic reversal: “It was a good thing that the dog he had befriended and which had accompanied him all the way down to the river, had wandered off when he passed the housing estate at the top of his road.” The reader is not led to think that—surprise!—Jack is the burglar after all. The drama is in the realization that he just barely missed becoming a victim of a Kafkaesque case of mistaken identity.

In “Effects and Causes,” Newton uses a different estrangement technique. In the following paragraph, a man has let himself into his home and pauses to muse in the vestibule,

It was with uncertainty that he glanced at the table by the door, now that he could see it. This was where letters accrued. There was also a chessboard, set up but rarely used. He thumbed through the envelopes. Each one was a demand for money. Once he might have found ideas, and descriptions of other places. There might have been a love-letter. He would have recognized the familiar handwriting on the envelope and felt excited as he tore it open. These had been personal words. The bills before him were impersonal. It was sad that such a rich mode of communication had been reduced to a mere vehicle of obligation.

Then, in the next paragraph, Newton, transports the narrative to another time and place with a single matter-of-fact sentence that does not call attention to the movement through time. A reader might almost miss it. A movie version would dream-ripple the image to make the transition obvious. Not Newton. He seems to purposefully avoid calling attention to transitions and this has the effect of allowing time travel, dream-like transitions that make no apology to and ask permission from the logical part of the brain.

There was another table by a door, in another place at a different time. Along with the letters there was a newspaper. The headline glared at him. ‘MAN KILLED IN A CROWD WITH POISONED UMBRELLA’.

With that the man’s thoughts take the reader back to another narrative line. After several pages of remembered details involving a woman who knew the murdered man, the narrative returns to original time and place with an in-transition that is as subtle as the out-transition. Newton has the perfect past tense, the word “now,” and the return of the first hall table do all the work of segueing back to the present.

Whatever had transpired she must be dead by now, considering his own age. He let the bills fall back on to the table, where he would leave them until they were no longer current and could be thrown away with impunity, at least as far as he was concerned.

Seven Cries of Delight contains twenty-four mentally twisty-turny stories that will show the reader how his/her mind is working. Several of these short stories are available as beautifully produced audio recordings on The Strange Recital, a “podcast about fiction that questions the nature of reality.” 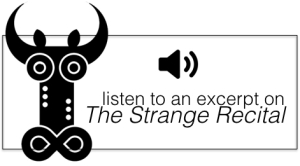