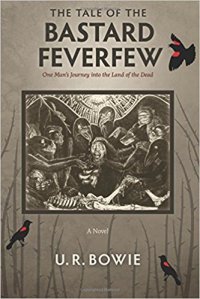 I like a book that’s unafraid of big themes, and this one has a beauty: mortality itself, the reality waiting behind our illusions of security. It’s a mythic idea, Orpheus’ descent into the underworld, and Bowie clearly intends us to understand it in terms of the universal as well as the particular.

The Tale of the Bastard Feverfew (Ogee Zakamora, 342 pages) begins rather slowly and at too much length, but pacing is less of an issue once the Palm Sunday riot at the Southwest Ohio Correctional Facility is fully underway and the initial explosion of violence settles into unmitigated tension. Length works then, mimicking the ongoing, endless strain. Personalities emerge, and we begin to hold our breath.

Our Orpheus is Correctional Officer J. D. Hemsler. He’s a stolid soul, apparently satisfied with his sons and wife, his hunting, his town, his Chevy and his coon dog. Such a figure might easily sink into caricature, but Hemsler is not unintelligent, nor mean, nor unaware. He knows how to listen. He makes an excellent, because unremarkable, hero. And he’s especially fortunate because he’s been trained for exactly this situation:

You don’t think of Wanda and the kids. They’re in the world of the living, and “while you’re in the world of the dead you keep your mind off the living.” A direct quote from Master Sergeant Horris R. McWhorter, U.S. Army, lecturer in survival training at Ft. Jackson, South Carolina. His course on being taken prisoner. “And another thing you never do if you’re in the hands of the enemy: you don’t laugh. Not that there’s anything funny, but some folks with a big hard-on want to prove they can still work up a little humor. ‘I ain’t a-skeert! Ha-ha.’ Don’t do that. They’ll take it for disrespect. If you want to keep your balls in the land of the dead, let your pecker hang low and soft. And never laugh.”

Blindfolded and cuffed, his badly beaten body lying on a hard bunk in a world without water or electricity, stinking of unflushed toilets and loud with the constant banging and crashing of deliberate destruction, he experiences intricate, fairy-tale dreams, and tells himself an heroic quest story to keep from thinking of home, of life. In this secondary narrative three confident brothers set out on a quest but quickly lose their certainty:

They had lost the mood for bleating, hooting and laughing. No more waving about of vorpal swords. They looked at each other and wondered, What next? Then, not having any alternative, they re-gathered their courage, tried out some re-hooting and re-laughing, spurred their mighty steeds, and gallumphed off still farther into the murk of the Forest Primeval. On and on they went. On and on. Gallumph. Gallumph.

This is a admirable but never fully integrated idea, Lewis Carroll language notwithstanding. Yet Hemsler’s fairy tale is touching in its naiveté, and demonstrates the value of such stories with their call to courage in the face of the unimaginable.

The town of Iuka mirrors a thousand other small towns across America: decent, churchgoing, and broke. It’s entirely dependent on the schemes of others in other places. Eventually a prison town, it’s at least surviving, there is regular employment. Bowie takes us down its streets, into the beauty parlor, the church, the school, and most intimately into the mind of retired teacher Holly Schwelle, dying of cervical cancer. This is a compelling narrative, but Holly remains too separate from the action; paralleling rather than contributing to the story. Granted death is everywhere, and everywhere ignored, denied, but this singular example narrows more than universalizes that truth: only one other person is dying.

The press is portrayed broadly here, and with a delightful satiric touch:

Mild-mannered Channel Five co-anchor Randy Small had arrived at that news conference late. Entering the back of the room in the middle of spokeswoman Haynes’ statement, he tried to push his way closer to the front, where he spotted one of his Action Focus camera teams, but two women representing Akron TV set upon him with fists and elbows, driving him back into a far corner. Baaing meekly like a sheep, he let himself be driven. Just before the end of the abbreviated proceedings, as Ms. Haynes left the proscenium, he edged his way from that corner toward the main entrance of this prefab building, hoping to get out ahead of the crowd. There he was knocked aside, fell to the floor and barely escaped injury as a stampede galloped past him on its way through the door. Not one easily perturbed, Mr. Small lay there in fetal position, arms wrapped around his head. When the stampede had passed he placidly picked himself up off the floor of the empty Visitors Center, dusted off his Brooks Brothers cobalt blue suit and adjusted his beige-yellow flowered tie. He took out a hand mirror and examined himself. Amazingly, his horn-rimmed spectacles were unfazed and every dark-brown hair slicked flat on his head was in perfect pomaded place— just like Clark Kent’s.

This is too broad to mesh well with the drama of a hostage crisis and the unalloyed horror we continue to feel for both the hostages and prisoners. Accurate, of course, and sharply depicted, and the journalists do provide welcome relief from the ongoing drama. Which said, a tornado theme that at one point involves the Weather Channel is unfortunate.

There are wonderful secondary characters throughout: Melvin Lindsey of WGET, the ‘get happy’ station. Attorney Ira Stein, famous for defending convicts. The ‘prisoncrats’ are fully realized, imperfect men: the warden ‘King Arthur’ Tibbetts, balances a rescue attempt against the loss of the hostages, weeps openly for a murdered C.O., and offers to exchange himself for his men.

The prison itself is knowledgeably depicted – its rules and systems, its stairwells and corridors and yards, its ethos and humor and pain. All this expertise adds a real if noticeable verisimilitude. The prisoners as a group seem overdrawn; they behave too much on cue with their antics or sporadic violence. But the few inmates we do come to know are compelling and function well if too conveniently in the narrative: leaders George Puguch, an Aryan Brother, and Ahmed Nawaz Abdullah, born Americus Smith, a natural orator. The crazed Ray Cloninger. Doc Hickson, the compulsive reader who knows well the ways of the ubiquitous redwing blackbird and of course of the feverfew plant. This is the heart of it, the unwanted feverfew, given a voice. As Smith declaims:

The main word, you know what that word is? That word is RESPECT. There’s the one thing every single person on earth craves, and the only thing left worth living for when you’re facing straight time in the Belly. Now, we’ve presented some demands to the prisoncrats. The list has been published and broadcast on radio and TV. I’d just like to request folks to take a look at it. Are we really asking that much? For one thing, being as we’ve committed some things that have got us in here doing high time, and I’m not saying we don’t, a lot of us, deserve to be in here, but being as we’re here, we’d like to live, to the greatest extent possible, in an atmosphere where we’re not bullied and disrespected. We’d like to be treated like what we are: human beings.

IUKA is a maximum-security prison, but the inmates know another, even more secure prison is in the works, designed to lock them deeper down, further from view. These convicts are presented as both vicious and victims, they are victims only of the prison system, because incarcerated. Bowie is clear on this point: we all subtract our own crimes from our moral accounting. But there is little consideration of the marginalizing social conditions that made these men, and so there’s little sense of genuine, because inevitable, tragedy.

In an effective afterward, Hemsler returns to life but lives always with the dead. He’s all too conscious of the skull beneath the skin. For him, every moment is laden with wonder, and infinitely precious. But such heightened awareness exiles him from his former, normal life.

The book succeeds in that it leaves the reader with a sense of a journey taken. We’ve experienced a reality we’d prefer to deny, we’ve endured and survived but will never completely forget. That’s an accomplishment for both author and reader.

–Mike Miller, author of Worthy of This Great City, 2015

One thought on “The Tale of the Bastard Feverfew: One Man’s Journey into the Land of the Dead by U.R. Bowie”