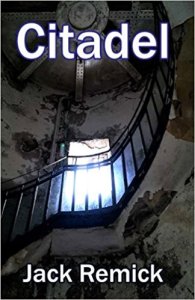 Citadel (Global, 372 pages) is a much needed, unforgiving and unapologetic evisceration of the idea of female inferiority we have so primitively accepted today and throughout history. Remick shows tremendous skill in the way he attacks such a heated and complicated subject. He never shies away from the atrocious acts of violence against women, but neither does he lose the magic of his whirlwind storytelling in favor of lecture. Citadel is an honest, sometimes savage look at the relationship between men and women, and what the world could be like if women were in control.

Trisha de Tours is an editor at Pinnacle Books and has been directed by her boss to find a bestseller. When she finds out the new resident in her condos, Daiva Izokaitis, has a manuscript called Citadel, she agrees to read it. Trisha soon finds out Daiva is a literary rebel, refusing to adhere to the fundamentals of writing and later refusing to participate in the editing process, yet she has created a revolutionary novel that overcomes Trisha so completely we see her drown in the story, and reemerging a different woman.

When we first meet Trisha, she enjoys a world of literature, good wine, and a steady stream of men she refers to as “beach meat”. She treats men as objects, running them through her criteria, sometimes taking them home for sex, and then sending them away. She is casual and dismissive, but beneath this is a fear one of these men might become violent or even kill her one day. Trisha becomes the embodiment of the unease women conceal throughout their lives, the way women behave as if it is a given men will not hurt them when in fact this assumption is often a bluff. Remick shows us the tragedy of how the prevalence of rape and violence poisons our entire culture when he says, “All men, rapists or not, benefit from the fear all women live with.”

When Trisha reads Citadel, she sees that Daiva has named this delicate state of being. She calls it the Niche. Remick creates many terms that are so relevant they could become a part of our everyday vocabulary without even a stutter. In this quote we see Trisha explain the Niche to her therapist: “Western women are in the Niche, Rose. We’re pretty little madonnas living in a pretty little Niche. We have a tiny window of freedom. It’s barely two hundred years wide and we think it will go on forever but it won’t. It’s eating me alive. You’re educated. You have a career. You have clients. You’re independent. You control your money. You own property. You vote. You’re free. Two hundred years ago, you couldn’t have any of that. That’s the Niche.” In this passage, we see Trisha not only realize how fortunate she is to live in the time and place she does, but more importantly, the fragility of the Niche. It is this realization that begins to unravel Trisha and send her deeper and deeper into Citadel until she is having conversations with its characters and until she is ultimately, terrified to publish the book at all, certain introducing the idea of women in control of everything will trigger the destruction of everything she knows.

Trisha is further haunted by Daiva’s insistence that the facts of Citadel are based in real, modern science. The Y chromosome is dying, and men are no longer necessary to continue society. Daiva sees the desperation of female discrimination through the objective lens of a scientist. Daiva speaks with terms like Residual Evolutionary Response. This refers to behaviors that have become part of our instinct, despite them no longer serving a purpose in our world. The Y chromosome is a casualty of Residual Evolutionary Response. Males go through the world relying on strength, mass, and violence, but these traits are no longer assets. Being comprised almost entirely of those traits, men themselves are no longer assets. Men seal their own ruination when they refuse to adapt, for reasons seen in this quote: “Men have no reason to change, they own the world and your body. Women for centuries have soft-pedaled their wants just to stay alive. One word – NO – changes everything in human evolution.” This is the heart of the struggle. Men refuse to change because they believe they are operating from a place of ultimate power, but women need but say no, together, to change everything.

As the characteristics that put men in control lose value, women gain strength, and there you find male hatred toward women. Daiva puts the struggle in simple terms here: “Competition between men and women grew intense as women became more competent at doing what man alone was supposed to do. Hence the repression of the intelligent and able woman by totally devaluing her position in the system of technology and progress. As soon as a field opened up to woman, it ceased to be of interest to man. In much the same way that the Y chromosome lost all but twenty-seven of its genes, men lost all ability except the abilities to kill, to copulate, and to make war.” Here we see that men find it inherently weak to be female. Once a woman can complete the same task, that task becomes feminine and weak, but this attitude has left men with little to do other than create war and chaos, which has less and less of a place in an awakened world, leaving men with no place at all.

Remick takes no shortcuts in this novel. He does not excuse or soften the reality of rape culture, but even though he has the opportunity to do so, he also does not simplify the issue of how to handle it. After a long history of horrific abuse, women have the capability to control the genome, to eliminate men entirely. It is a simple answer. After the brutality we see from men, it even seems like the obvious answer, but Remick does not reduce this story to an all-female utopia. The women of this story, ever compassionate and wise, contemplate many different answers. They agonize over whether they will still be human if they eliminate men. Remick gives his female characters what their male counterparts lacked, the capacity to make decisions from a place of far-sighted morality, not immediate self-interest.

Remick also shows a deep reverence for language both in the rhythm and precision of his prose, and in his content. He draws the connection between language and the way it can manipulate culture in this passage: “The phenomenon of semantic overloading that characterized Old Society language produced such obviously incomprehensible phrases as ‘protective reaction strike,’ ‘peacetime army,’ ‘cold war’ and ‘planned obsolescence.’ The result of these ambiguities was a total loss of credibility, a disenchantment with language and a consequent degeneration of language into what we call visible thingism.” Remick continues to play with language as he points out that the word “lesbian” is not the female equivalent of the word “gay”, and introduces the term “post-lesbian”. This concept will put your mind through several rounds of acrobatics, and it becomes the foundation upon which the concepts of family, love, desire, and what it means to be human will be drawn into question.

Remick goes on to further honor the importance of the craft of writing by showing the details of Trisha’s editing process as she tries to pick Citadel apart, and instead finds it analyzing her. In writing a book within a book, Remick has created a literary fractal that holds up no matter how far in or out you look. When you look at these passages, you see Remick not only honoring the usually ignored role of editor, you also see the parallels between writer and God, character and human. Trisha writes to Daiva, “You create a world and then you let it go before it is ready and it creeps out as a half-formed creature gasping for breath then dying in the silence and agony. I can’t let that happen to this novel.” Trisha despairs about Daiva’s refusal to participate in the editing process, resistant to taking her place, but unwilling to abandon the story.

We stay with Trisha as she continues to analyze the writer. “The creator who sets you in motion, gives you a name⎯or not⎯then thrusts you out into the unfinished, unknowable, unreal world. What character ever had any hope of a future? In this I see the editor as savior.” In this passage, Trisha goes so far as to evoke the comparison herself, labeling the editor savior. The writer creates a universe, a world with rules and people and feelings, and then leaves it half-formed. This is the relationship we know with God. We have been formed out of the ether, provided an abundant and astounding universe, but we’ve been abandoned to never hear another word from our creator, to blindly stumble and fall through this world. The editor, or savior, must come down and tend to these forgotten creations, and guide them to their full formation. Finally, in the following passage, we see the anger that arises from such abandonment. “Writers are not just idiot children, they are careless narcissists unfit even to own a pencil, a pen, a computer, egoists who give no thought to all the chaos and anguish, all the pain and perversion they bring into the world.”

This is an important interaction between story, character, and editor, because this is where we can see the literary fractal at its largest scope. Remick does not simply write the Citadel book; he writes a book about the book. In doing this, we are able to see the book within the book, the effect the fictional book has on its creators, the effect of those characters on us, the effect the book has on the fictional modern world, and finally, are left to ponder the effect it could have on our world. These are only some of the many levels and angles you could choose to view this story through, and the beautiful way it is divided allows the mind to process the enormity of these truths in manageable pieces.

This is an important novel that is exceptionally written. This kind of dissection of today’s culture is not just called for, but begged for. Citadel will hit you so hard you’re slapped right off the page, but it will follow you.

–Nicole Disney, author of Dissonance in A Minor, 2013

One thought on “Citadel by Jack Remick”