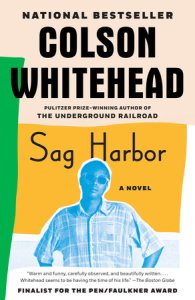 Though I spent a not inconsequential portion of my early-twenties leisure time at Bay Street in Sag Harbor, where such reggae luminaries as Steel Pulse, Black Uhuru, Burning Spear, and Lucky Dube frequently performed, I did not know that not far from the concert venue was a neighborhood that had been built by African-American families after World War II. That neighborhood, made up of Azurest, Sag Harbor Hills, and Nineveh, is geographically and existentially at the center of Colson Whitehead’s  Sag Harbor  (Penguin/Random House, 352 pages).

Early in the novel, the now grown-up narrator Benji recalls his fifteen-year-old self settling into Sag Harbor for the summer of 1985 and contemplates the mythical aura that surrounded some of the people who came before him:

“What I did know about DuBois was that he fell into the category of Famous Black Folk—there was a way people said certain names so that they had an emanation or halo. The respectful way my mother pronounced DuBois told me that the man had uplifted the race.”

Benji goes on to recall having read DuBois in college for the first time and having been “blown away” by DuBois’s expression of “this double-consciousness, this sense of always looking at one’s self through the eyes of others, measuring one’s soul by the tape of a world that looks on in amused contempt or pity. One ever feels his two-ness.” Whether it’s occasioned by Benji’s remembering that he “was used to being the only black kid in the room” or whether it’s occasioned by his detailing how “[b]lack boys with beach houses…could embrace the beach part…and the black part” without thinking of themselves “as odd birds,” an awareness of DuBois’s sense of “two-ness” floats throughout the novel.

My grandparents on my mother’s side were racist in the way that certain people of Hibernian extraction who grew up in Flatbush during the Depression and the pre-War years were racist. They expressed their racism in the manner that DuBois described—in voices of amused contempt, which sounded to the ears I had when I was young more like amusement than contempt. And they expressed it from a distance, distance being necessary to perpetuate the crucial ruse of otherness, of not being them. So most of what I heard was in the Chrysler as my grandfather drove us into or around the city and my grandmother looked with mild interest out the window, as though she’d been blessed with noble blood and its detachment privileges, remarking on the African Americans she saw in terms that I will call pejorative. I mention this because I don’t believe my grandparents, post-War residents of Levittown, could have imagined that each summer in Sag Harbor, where I don’t believe they could have dreamed of ever summering themselves, was a community of African-American professionals who grilled and idled and communed and swam and fished and partied and were separated from the likes of my maternal grandparents by a great deal more than race.

Having grown up on Long Island in the ‘70s and ‘80s, I can’t say that I imagined such an enclave either.  Sag Harbor reminded me that ignorance, provincialism, or whatever you prefer to call it, is inherited as easily, as passively as property or iris color. It reminded me how territorial the notion of inheritance can be. Who determined who belonged where?  Sag Harbor showed me how that process of determination was received and reinterpreted and ultimately upended by a portion of the population that most people I had known when I was young would have been skeptical about and would have needed anecdotal evidence at least to entertain the possibility that it existed:

“Certainly that first generation claimed and settled on Sag Harbor Bay because the south side was off-limits—the white people owned the coastline, Southampton, Bridgehampton, East Hampton. And the Jersey shore, and every other sandy stretch of vista-full property in the tristate area, the natural places of escape from city life.No Negroes, please. That first generation came from Harlem, Brownstone Brooklyn, inland Jersey islands of the black community. They were doctors, lawyers, city workers, teachers by the dozen. Undertakers. Respectable professions of need, after Jim Crow’s logic: white doctors won’t lay a hand on us, we have to heal ourselves; white people won’t deliver us to God, we must save ourselves; white people won’t throw dirt in our graves, we must bury ourselves. Fill a need well, and you prospered. Prosper and you took what was yours. Once The War was over (there was only one War when the old heads took us to school), finished, and the new American future beckoned—with bony skeletal fingers, but beckoning nonetheless, don’t quibble—and why shouldn’t they answer? They had fought to make a good life for themselves, vanquished the primitives and barbarians out to kill them, keep them out, string them up, and they wanted all the spoils of their struggle. A place to go in the summer with their families. To make something new.”

In that paragraph, Whitehead manages to capture with concision, but also with the panoramic sweep of history, the sense of exodus, exclusion, persecution, perseverance, service, settlement, and belonging.

Throughout the novel, Whitehead explores how that history complicated the peculiar insecurities of adolescence. The teenaged Benji tried to quietly reconcile things he did (but shouldn’t) like with things he did (and should) like, and he wondered why so many of his interests seemed mutually exclusive. When a friend, Marcus, hassled Benji about his claim that Afrika Bambaataa and Soulsonic Force’s “Planet Rock” borrowed a bit from Kraftwerk, Benji simply said, “[Kraftwerk’s] ‘Trans-Europe Express’ came out in the late ‘70s, I’m telling you.” But, looking back on it, the adult Benji says,

“I didn’t understand back then why Marcus was hassling me, but I get it now. A couple of years later, if someone said ‘I stole that off an old Lou Donaldson record,’ and the sample kicked it, you got respect for your expertise and keen ear. Funk, free jazz, disco, cartoons, German synthesizer music—it didn’t matter where it came from, the art was converting it to new use. Manipulating what you had at your disposal for your own purposes, jerry-rigging your new creation. But before sampling became an art form with a philosophy, biting off somebody was a major crime, thuggery on an atrocious scale. Your style, your vibe, was all you had.”

The teenaged Benji was in the process of figuring out what his style and his vibe were, and so, except for saying he was only giving Marcus information, he didn’t further push the Kraftwerk point. The adult Benji, however, reflecting on his sampling revelation, says, “I didn’t know it myself. I just knew that it was okay to like both Afrika Bambaataa and Kraftwerk, and I liked what Afrika did with Kraftwerk.”

When Marcus said to Benji, “I forgot you like that white music, you fuckin’ Siouxsie and the Banshees-listenin’ motherfucker,” the teenaged Benji didn’t try to defend himself. But the adult Benji amusingly confesses to the reader, “Let’s just put it out there: I liked the Smiths.” His honesty, both as an adult and as a teenager, run counter to the fronts his teenaged friends often put up. After Marcus’s Siouxsie and the Banshees condemnation, Marcus was slapped upside the head with his own apparent musical infidelity:

“‘I don’t know what you’re talking about, Marcus,’ Clive said. ‘I put on that Tears for Fears song last night and you were all, ‘That’s the shit.’

Whitehead captures the boys’ sense of vulnerability and the linguistic aggression that compensated for their awareness of that vulnerability. As a former teenager who was not blessed to have owned a Members Only jacket, I experienced particular delight when NP, one of Benji’s friends and coworkers at a Sag Harbor ice-cream shop, insulted Bobby, another friend and coworker, with “Shut up, you pleather Members Only-wearin’ motherfucker.” As the adult Benji explains,

“The trend that summer, insult-wise, was toward grammatical acrobatics, the unlikely collage. One smashed a colorful and evocative noun or proper noun into a pejorative, gluing them together with an -in’ verb. I’m not sure of the syntactical parentage of the -in’ verbs, so I’ll just call them -in’ verbs. Verbal noun, gerundlike creature, cog in the adjectival machine, who knew—as was the case with some of the people in my living room, there was a little uncertainty in the bloodlines.”

It is rare to hear a class of insults so hilariously and expertly parsed.

The insults came down from on high as well. Though Benji’s father, a doctor, and his mother, a lawyer, mostly went out to Sag Harbor from the city on the weekends, leaving Benji and his brother Reggie on their own in Sag Harbor during the week, the parents’ presence on the weekends introduced tensions that eventually reveal both filial respect on Benji’s part and an awareness of a sort of generational succession by the end of the summer. Benji the adult says, “We were a Cosby family, good on paper,” but he also admits, “We were a few months into When Dad Called Reggie Shithead for a Year…[for bringing] home two C minuses on his report card.” When Benji’s friend Clive cut Benji’s hair one day, Benji’s father is similarly blunt: “Look like one of those corner niggers.” As Benji clarifies,

“Groups of brown young men—black, Dominican, Puerto Rican—hung out in alternating shifts outside the bodega on the corner of 101st and Broadway, that locus of licentiousness. Whenever something went awry in the neighborhood, the corner niggers eagerly stepped up for scapegoat duty. Gum mashed into your shoe, runny dog shit in front of the building, transit strike: these were all well-known manifestations of corner-nigger high jinks. They kept their hair grazed down to quarter-inch stubble, and Clive had
inducted me into their gang.”

His father’s criticisms were harsh, but in them was implicit an awareness of the world his sons existed in, an awareness of what must be overcome. In another instance, Benji’s failure to violently respond to an offensive incident in which a white student had run his fingers across Benji’s cheek and said, “Look—it doesn’t come off,” provoked his father to strike Benji several times, each time asking, “Can he hit you harder than that?” Benji finally said no, and his father said, “Who’s going to protect you if you don’t do it? Me? Your mother? The world’s not going to protect you. That’s what I’m trying to teach you.” It’s a powerful scene: a father, simultaneously protective and abusive, wise and fearful, and a son, embarrassed and emboldened, trying to make room for the disturbing lesson in his life.

But Benji the adult, a person whose experience extends beyond the narrative, is not resentful. He reflects on what it means to be the bearer of a standard and to be devoted to the focused passion:

“My father had his own laws, a precise concept of fire formation honed over the years. To people like you and me, a briquette is a briquette. Not to him. He seemed to analyze each coal individually, taking measure of its strengths, deficits, secret potential. The diamond in the darkness. He knew where they needed to go, recognizing the uniqueness of each cube and determining where it fit with the rest of the team. He assembled the pyramid meticulously, perceiving the invisible—the crooked corridors of ventilation between the briquettes, the heat traps and inevitable vectors of released energy, any potential irregularity that might undermine the project. The sublime interconnectedness of it all. He asserted order. Built his fire.”