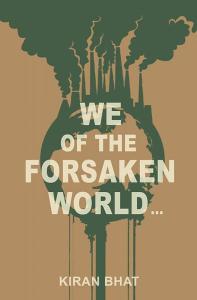 Anyone familiar with the inventions and predictions of Ray Kurtzweil might think of the Singularity he has discussed as they enter the scenes of Kiran Bhat’s we, of the forsaken world (Iguana Books, 216 pages). In other words, either the human race is on the brink of extinction, or we are on the verge of a physical, technological, even spiritual lift-off that will mark our history as indelibly as the invention of the longbow, the steam engine, or the computer….are you ready to be experienced?

In Bhat’s novel, we see the birth of a new world consciousness, a singularity not of human and machine, but human and earth, “a full actualization of consciousness,” out of the very familiar world we live in: one of inequality, mistrust and conflict. Therefore, if to imagine is to make so, Bhat’s novel is a step in the right direction.

Out of the babble of the social media we have come to eye more and more with suspicion, Bhat’s novel shows us how the connections so seemingly viral are the birth pains of a rising global consciousness on the level of a “merge into Brahmin.” We need more visions like these.

Is there a Hindu undertone to the novel? If so, it only functions as an operating system for the story itself, ground for the intertwining narratives of people from the smallest rural villages to the most crowded metropolitan arenas becoming more and more connected in the web of Bhat’s novel. It’s an ambitious, forward-looking narrative with a unified global vision for humanity, yet, Bhat is unflinching in addressing the challenges we face: from the “Tribe of the Silt” to the “Black City,” the environmental, social, psychological and even spiritual trials that affect us are all here.

“The words I wanted to say…” one character communicates, and with a kind of negative capability and sensitivity, Bhat glides in and out of various characters from all strata of the global village and gives voice to the inner narratives of otherwise silent neighbors, and in so doing, deftly voices what has been silent, “Oh, brother, my brother, where would you have gone if you were like me?”

Formally, Bhat’s novel braids several narratives, as well as narrative styles, incorporating internal monologue in passages so poetic they break across the page in bold type: intriguing, challenging, but to fine effect:

My mother is good people…
Like the river mist of an early sunrise,
Like the shove of the sand against my feet.

The poet Theodore Rhoethke once wrote that every line of a poem should be a poem. And indeed, as you glide swiftly in the current of Bhat’s narrative, make note of the beauty of the language as well: “I stared into his eyes so deeply and for so long that it was no longer me who was staring at him at all…” And like a line of a poem that is a poem, as part relates to part and part to whole, we hear the musical theme even here. The singularity, the essence of Brahma…the world coming awake.
Who has not seen or been this:

He didn’t look up from his phone. How many sons had the nerve to do that while a parent spoke to them, to sit there on the only chair in the room, a chair that was older than the boy himself, with his footprint on the only table in the house, a gift from the best carpenter in town, looking at his phone, with no other thoughts in his mind?

I would return home to find him still sitting there with his feet up, listening to music on his headset, probably unaware that I had ever left the store. But while I was still riding my motorcycle, I was back in the fantasy, imagining the happy reunion of father and son…

And after his generous act, the voiceless voice again through poetry comes to us:

I guess I was wrong,
I said out loud to myself,
driving back to the main road.
I am built from the clay of the spirits.
I stare at the eyes of the snake.
I do not back down.

Villager, convenience store owner, celebrity: we keep getting glimpses. And of what you might ask? Bhat’s introduction on the structure is a lovely “map,” but the pleasure of the language washing over is the real reward, as moment after moment, we see emerging the spirit Bhat is bringing to life in these pages, in the world: “The eyes of the eternal” looking back at us.

–Douglas Cole, author of The White Field (forthcoming in 2020)