END_OF_DOCUMENT_TOKEN_TO_BE_REPLACED

NOTHING IS TRUE. EVERYTHING IS PERMITTED

Undeniably the magnum opus of his later (some might say entire) career, the trilogy of novels produced by William S. Burroughs between 1981 and 1987 continues to cast its shadow as one of the most enduring pieces of experimental American literature ever written.

Whether readers find this “great work” to be great indeed or just greatly disappointing will largely depend on their opinion of Naked Lunch (1959) and his other novels from the 60s and 70s, because although the form and substance have matured quite a bit in the intervening decades, there is still much from these early cut-ups prefiguring the wild rides that are Cities of the Red Night (1981), The Place of Dead Roads (1983), and The Western Lands (1987). The lurid descriptions of sex, drugs, and violence are still very much present in END_OF_DOCUMENT_TOKEN_TO_BE_REPLACED

The Fermata (Vintage, 330 pages). This erotic or “rot” (as the intellectual hero who can stop time by pushing up his glasses likes to call it) work by Nicholson Baker (author of the earlier Vox, about phone sex) is a wonderful literary experiment–a blend of wordplay, and slightly self-conscious and deliciously quasi-guilty fantasies come true (at least in the literary frame) due to the protagonist’s ability to dip into what he calls the Fold, or the Drop–the time-stopped world where women can not only be undressed, playing with their bodies, but also subliminally seduced–by stopping time and arranging things along the periphery of their vision–or along their Mons veneris. In an acrobatic bit of literary legerdemain Baker straddles, if END_OF_DOCUMENT_TOKEN_TO_BE_REPLACED 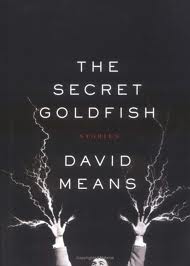 This inventive collection of stories, The Secret Goldfish (Fourth Estate, 224 pages), revolves around the off-kilter — either something happens that cannot be explained or the characters are bewildered about how they came to be where they are. In the title story, a goldfish survives for nine years despite the odds in a murky, nearly airless tank while a marriage disintegrates. “Blown From the Bridge” tells of the last moments a young man shares with his lover before she and her car are blown off the Mackinac bridge, her fate sealed by a mysterious dedication to her father. The main character of “Lightning Man” cannot escape a lifetime of lightning strikes, but he continues anyway through his ruined and END_OF_DOCUMENT_TOKEN_TO_BE_REPLACED

In the opening pages of Kirstin Allio’s debut novel, Garner (Coffee House Press, 232 pages ), young Frances Giddens is found by the town’s postman drowned in Blood Brook. It is 1925, and the town of Garner, New Hampshire is struggling financially. The postman, Willard Heald, is obviously troubled by Frances’s death even as he labors over his handwritten history of the town. His wife watches him with suspicion, for she suspects him of having harbored a crush on the spirited teenager. The summer boarders staying at the Giddens family’s house remain silent, as do those who lift her body out of the stream. No one dares utter the questions lurking in the reader’s mind: Did Frances kill herself or was she murdered? And why? END_OF_DOCUMENT_TOKEN_TO_BE_REPLACED

Margaret Atwood’s Oryx and Crake (Nan A. Talese, 383 pages) presents the reader with a significant but rewarding challenge. Though as an author she rejects any association with the term “science fiction”, that basically is the genre in which this novel lives. And it really does come to life, though exactly which life-form might be open to debate.

Oryx and Crake are nicknames. Both are animal species and both are extinct. Oryx is female and Crake is male. They are both acquaintances of Snowman, who is really Jimmy. END_OF_DOCUMENT_TOKEN_TO_BE_REPLACED